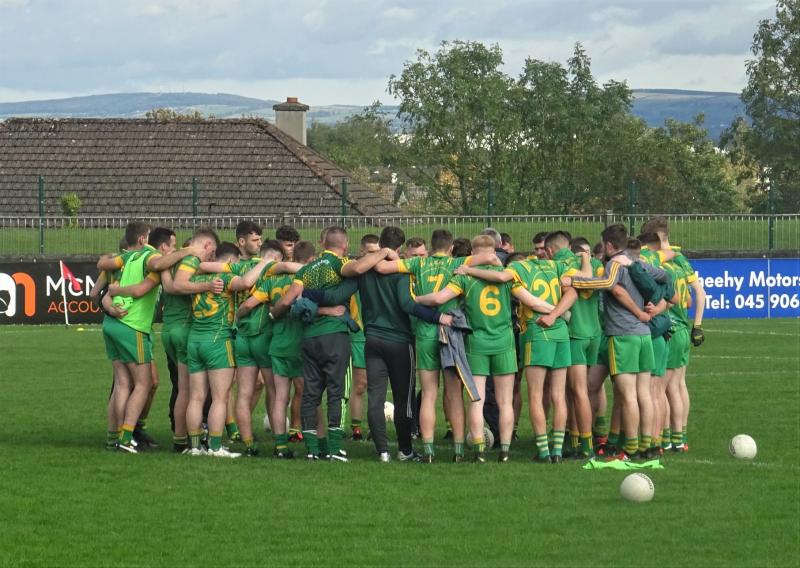 After Naas were defeated in the Leinster Intermediate Hurling Championship semi-final at the weekend there is only one Kildare club left standing and that is Ballymore Eustace.

The Kildare Junior Football Champions will take on Clann Na Gael of Meath in the Leinster Semi-Final at Trim this afternoon but their preparation has been far from ideal.

Ballymore were impressive winners over Longford Champions Kenagh in the opening round on an impressive 2-20 to 0-5 scoreline but instead of full focus being on today’s encounter Ballymore had to cope with the distraction of an Under 21 B Football Final.

Up to 12 or 13 players were in the team that took on Athy last weekend and the worst thing for Senior boss Paul Breen was the fact that the game went to extra-time.

Tadhg Barrett’s stoppage time goal brought the game to added on time before Athy eventually pulled away to win by five points but playing such a tough game over eighty minutes was probably the last thing Ballymore needed.

Star man Niall Murphy went down with a knock near the end of the game but he seemed to recover well and a lot will be expected of him when Ballymore take to the field today.

The team standing in their way of reaching a Provincial Final are Clann Na Gael and the Meath side have had a very eventful few weeks.

They captured the Meath Junior Championship title in October when defeating Moylagh on a 3-8 to 1-9 scoreline after a replay with Darragh Griffin, Ger O’Sullivan and Ryan McNamee getting the goals.

As a result they advanced to a Leinster Semi-Final with Westmeath’s Ballynacargy in Mullingar and by coincidence or not they came out on top on the exact same scoreline as the County Final.

The Athboy/Rathcairn based outfit were helped by two goals from Darragh Griffin and he seems to be the Meath side’s go to man so Ballymore will have to keep a close eye on him.

The weekend gone was a busy one for Clann Na Gael as well as Ballymore as they completed a League and Championship double on the hurling side of things with a few dual stars involved.

On paper this looks a tough test for Ballymore and they will need curb Clann Na Gael’s goal threat but the Kildare side have huge talent in their ranks and if they click they won’t be far away.

One worry though is the continued absence of Mark Barrett through injury and his availability would certainly be a huge boost to Ballymore.

The Kildare senior star hasn’t played since the County Final win over Robertstown so he would have to be classed as very doubtful.

In saying that if the likes of Niall and Simon Murphy as well as Tadhg Barrett can get enough ball inside there is the potential for them to put up a winning score.