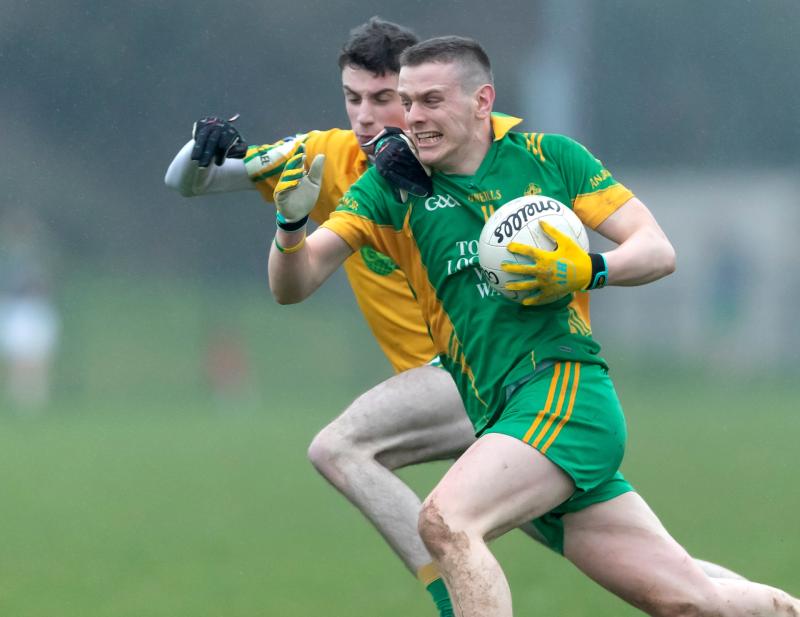 Ballymore Eustace’s Leinster Championship hopes came to a crushing end when they fell to a one point defeat at the hands of Clann Na Gael on Saturday afternoon.

Goals in each half from Darragh Griffin and Phillip Garry did the job for the Meath Champions in a game that was played in very difficult conditions.

When Ballymore look back on the game they will realise it was the first half where they had a gale force wind at their backs that lost the game for them.

They led 0-9 to 1-5 at the break but they missed numerous chances to extend that buffer with Phillip Garry’s goal keeping Clann Na Gael in touch.

Stephen Dwyer did net a second half penalty to put Ballymore three points clear at the time but once Darragh Griffin did likewise in the 55th minute it was all she wrote for the Kildare outfit.

Niall Murphy did leave just one between them entering stoppage time but a stubborn Clann Na Gael rearguard kept Ballymore out to book their place in the Leinster Final.

Clann Na Gael started the better and within five minutes they were two points clear after Cian Swaine kicked over a pair of frees.

Ballymore soon found their groove though with points from Niall and Simon Murphy edging them into a 0-3 to 0-2 lead at the halfway mark of the half.

It should have been a much bigger advantage however as Ballymore missed a number of scoreable opportunities including the usually reliable Niall Murphy who kicked a few frees wide.

Clann Na Gael took advantage of Ballymore’s misgivings and got the games opening goal when  Ballymore turned over possession to  Darragh Griffin and he found Phillip Garry for him to race clear and shoot past Steve Foley.

Garry and Swaine then followed up with points and in the space of a few minutes Clann Na Gael went four clear on the scoreboard.

Niall Murphy, Brian Crowe and Tadhg Barrett then got Ballymore back to within a point before a Cian Swaine free extended the Clann Na Gael tally.

Ballymore did end the half in front though as they scored the last three points before the half-time whistle as efforts from the two Murphy’s and Shane Barrett gave them a 0-9 to 1-5 lead.

Like Ballymore in the first period Clann Na Gael kicked a number of wides at the beginning of the second half before a Jack Doherty 45 levelled up matters.

Ballymore responded in style however when Simon Murphy was fouled in the square on the back of an inside pass from Keith Fennell and with a penalty awarded Stephen Dwyer stuck away the shot in emphatic style.

That was as good as it got for Ballymore though as they didn’t score for another twenty two minutes and although Garreth Clarke and Tadhg Barrett both went close for goal Clann Na Gael gradually took control as they scored 1-2 without reply.

Doherty and Swaine got Clann Na Gael within range before the games crucial score arrived five minutes from time when Coilin Griffin was dragged down by Shane Barrett for the games second penalty and Darragh Griffin scored to give Clann Na Gael a two point lead.

Ballymore rallied afterwards with a Murphy free leaving just the minimum between the sides but no matter how har they tried they couldn’t force an equaliser as Clann Na Gael sealed a place in the Final.