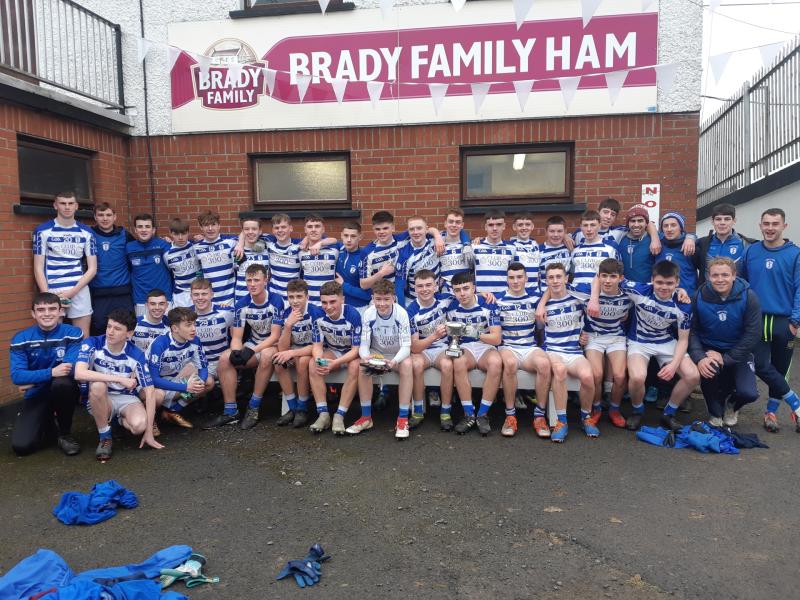 Under 17 A Football Championship Final

It was more silverware for Naas as they edged a pulsating Under 17 Football Championship Final with Clane in St.Conleths Park.

Eoghan Merriman and Kevin Cummins got the goals that set the platform for a Naas victory that looked highly unlikely when they trailed 0-8 to 0-1 after only fifteen minutes.

Naas gradually worked their way into the game though and a strong second half ensured they repeated the result of the Minor Final a few weeks previous.

It only took three minutes for the opening score with Kevin Cummins kicking Naas in front but it was a first quarter that was almost exclusively dominated by Clane as they scored eight points on the trot.

Cormac Vizzard equalised when he worked a short free with Hugh Prendergast before two Adam Fanning frees gave the team in all white the lead.

Naas battled back well though and they kicked the next five scores with three points from Dan Woulfe being followed by Nicky Sweeney and Neil Aherne.

It was a real topsy turvy half with each side having dominant periods and Clane got another one between the 21st and 28th minutes as scores from Fanning, Tighe and Oisin O’Sullivan left Mickser Condon’s outfit in a double scores 0-12 to 0-6 lead.

Naas ate into that deficit before the break though with a well taken Kevin Cummins goal coming before Neil Aherne kicked his second point and if he was a bit more clinical a goal may have been there for him.

Clane had the last say of an action packed thirty minutes with Kildare Minor Panellist Oisin O’Sullivan kicking in a great goal to leave his side 1-12 to 1-7 to the good at the interval.

Dean O’Shea extended the Clane lead to six at the beginning of the second half but instead of pushing on they went into their shell a bit and Naas took full advantage as they scored 1-3 without reply to go level.

Man of the match in the Minor Final a few weeks ago Brendan Quinn emerged off the bench at the break and he had a huge impact.

It was Cummins, Aherne and Declan Kirwan who got quickfire points before Cummins rattled in his second goal.

It was Naas’s only goal during that dominant period and Clane have Cian Burke to thank for that after he denied both Cummins and Brendan Quinn close in.

Clane eventually refound their groove with a 48th minute Oisin Tighe score while a couple of minutes late the same player doubled the Clane lead.

Brendan Quinn and Dean Comiskey then shared points before Naas hit Clane with a sucker punch when a devastating counter attack resulted in Eoghan Merriman cooly slotting past Burke.

Clane had late claims for a penalty involving Tighe but had to be content with a Dean O’Shea free and when Quinn added on two late efforts down the other end Naas had done enough to claim a two point victory.