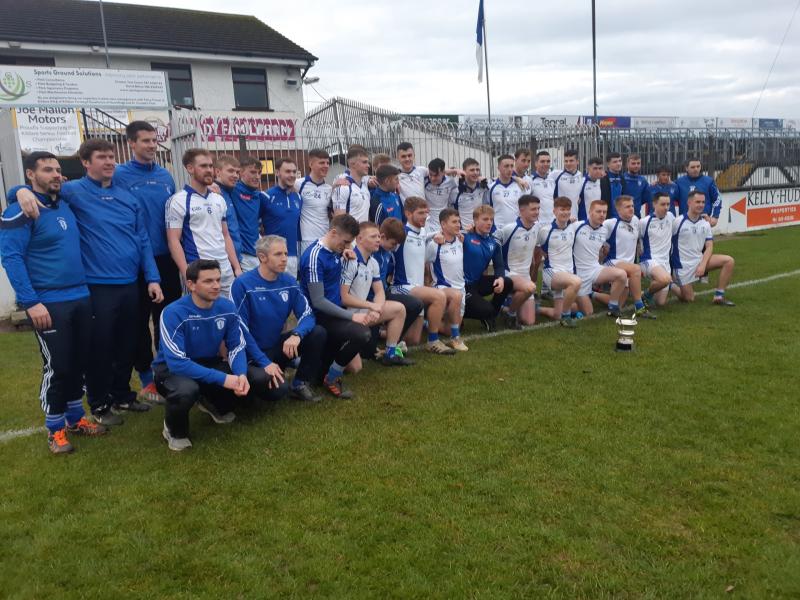 It was the fairytale ending to an almost perfect year as Naas captured the Under 21 Football Title with victory over Celbridge in St.Conleths Park on Sunday.

The result means Naas have won Under 17, Minor and 21 Titles this term and their eyes are now very much on the Senior prize.

Naas came into the game as the hottest of favourites and for periods it certainly told as they struggled to fend off a buoyant Celbridge challenge.

Naas reached double figures in wides and it wasn’t until James Burke kicked in a 47th minute goal that they found breathing space on the scoreboard.

While naturally disappointed Celbridge can be proud of a very fruitful campaign and when Darragh Archbold converted a second half penalty there was only a point between the sides before Naas took control.

It was a free flowing opening six minutes to the contest as the sides were deadlocked at 0-2 apiece with points from play for Naas from Luke Griffin and Darragh Kirwan being cancelled out by Liam O’Flynn and Darragh Murphy.

Griffin and Dallan Gallagher then doubled the Naas lead but they were struggling to get out of the grip of a defiant Celbridge defence and wayward kicking from the likes of Kirwan and Alex Beirne weren’t helping.

Celbridge responded with an effort from distance by Tony Archbold and their style of play seemed to be causing Naas problems until Dallan Gallagher drilled in a 25th minute goal.

Adam Cronin and Brian Stynes were both heavily involved in the move that enabled Gallagher to shoot past Tadhg Halpin.

Celbridge remained in touch at the interval though with a Darragh Murphy free leaving just three between the sides.

The second half was a lot more open than the first with Naas kicking on with efforts from Griffin and Alex Beirne before Celbridge hit back in the shape of a Darragh Murphy free.

Celbridge then found a real route into the tussle when Beirne fouled Conor Doyle in the square and Billy O’Connell awarded a penalty which Darragh Archbold converted in style.

Naas responded with Darragh Kirwan scoring his second of the day to leave Naas ahead on a 1-7 to 1-5 scoreline but there was soon only one in it again when Darragh Archbold found the target.

It was set up for a dramatic final quarter but come the 47th minute there was no doubt who was in command as Paddy McDermott made a barnstorming run through the Celbridge defence before offloading for James Burke to finish for a fine goal and give Naas a four point cushion.

Griffin and goalkeeper Luke Mullins with a 45  duly extended the Naas tally but successive Darragh Murphy frees left just three points in it.

Murphy had a couple more placed ball opportunities but after dropping them short Naas took full advantage with Griffin, Ciaran Doyle and Tom Browne all kicking late points as Naas rounded off 2019 with another trophy as they won out on a 2-12 to 1-9 scoreline.