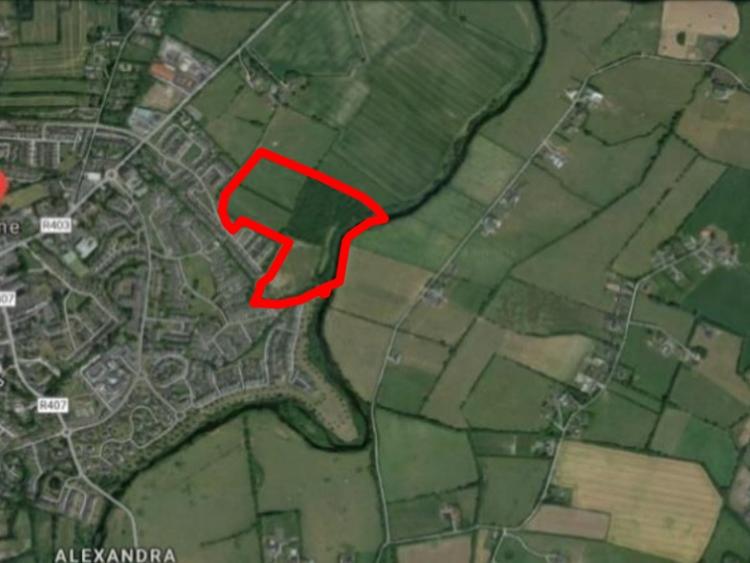 The location of the proposed new housing estate

A planning application for 305 new housing units in Clane, submitted on November 15 last is too big for the town, a local county councillor has said.

"The scale of the proposal exceeds the growth rates for Clane that were set out in the Local Area Plan, 2017-2019," Cllr Padraig McEvoy says.

"This is a matter of concern given that Clane's capacity to support growth was assessed as a small growth town without a train station. The trend will feed into a high dependency on private cars."

An Bord Pleanala, he said, is "driving a policy of increasing densities, appropriate to large-scale towns, to all developments. Developers initially propose smaller densities, as per the local area plan, and then during consultation An Bord PLeanala requires redesign to higher density.

"This knocks the hierarchy of settlements out across the county."

Meanwhile a flier has been sent around the town argues that the scale of the application is too great and urges people to submit observations on the application by December 1, which is this Sunday.

The application includes 112 houses, 20 maisonettes, 139 apartments in 4 blocks and 34 duplex apartments and, if built, it will be at Capdoo and Abbeylands, Clane.

The development will also have 553 parking spaces and, it is understood, access will be through the existing estate of Brooklands, and Alexandra Walk.

The flier predicts “serious and prolonged heavy construction traffic, noise and associated inconvenience for Brooklands residents during the construction phase”.

But beyond the immediate concern of construction inconvenience, the flier makes the point that the development will add up to 1,000 people to the population of Clane, a small town that is already struggling with the numbers of people moving there.
It follows approximately a month after An Bord Pleanala gave the go ahead for 184 houses and 182 apartments, also at Capdoo.

That application included a new road joining College (Kilcock) R407 to the Capdoo Park access road (Capdoo Lane) to the south and the Celbridge Road (R403).

The flier expresses the fear that Clane could see a total of 4,000 additional people moving into the town. The 2016 census recorded 7,280 people living there already. An additional 4,000 is more than 50%.

“For a small town like Clane this is unsustainable. The existing infrastructure won’t cope. Quality of life for current residents will be seriously impacted,” the author of the flier said.

They added that they believe the 305 “must be scaled back or stopped”. The flier informs locals that the latest application, in the name of Westar Group, has not been made to Kildare County Council but to An Bord Pleanala’s Strategic Housing Unit.

Clane residents concerned about the proposal can text 0894641327 to express interest in opposing the proposal. The closing date for observations is this coming Sunday, December 1.