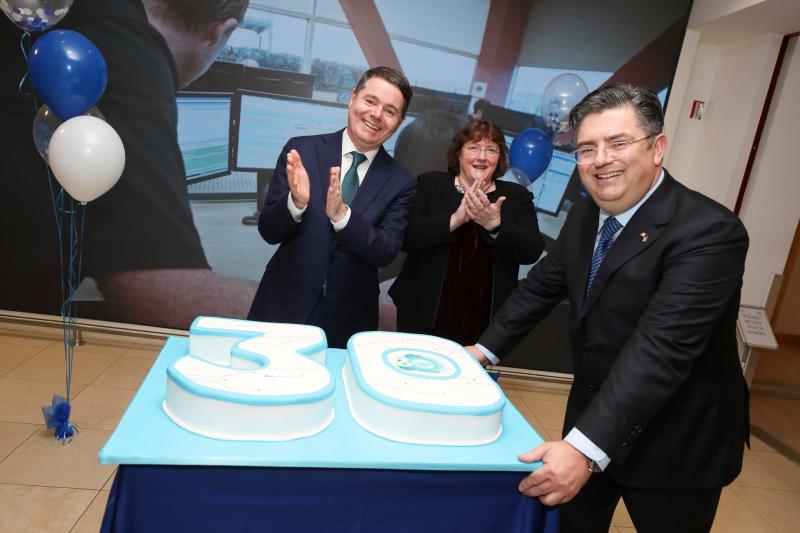 Last Friday November 22, marked a special day for Intel as it celebrated the 30th Anniversary of operations in Kildare.

Intel first decided to locate its technology campus in Lexlip in 1989 and since then, over $15 billion has been invested in the 360-acre former stud farm, creating one of the world’s most technologically advanced manufacturing facilities that produces some of the most advanced products on the planet.

Over the past 30 years Intel has come to represent a diversity of activities across the spectrum of Intel business from advanced manufacturing to cutting edge research and design.

To mark the occasion of 30 years of Intel in Ireland, a number of external guests joined with Intel Ireland employees at the Leixlip campus to commemorate this significant day, to reflect upon the milestones and memories of the past 30 years, and to look to the next chapter.

The celebratory event was attended by a number of special guests including the Mayor of Kildare, Suzanne Doyle, Minister for Finance and Public Expenditure and Reform, Paschal Donohoe, Senior Vice President and General Manager of Manufacturing and Operations at Intel, Ann Kelleher and Intel Ireland General Manager Eamonn Sinnott.

Intel’s operations in Kildare, which today has almost 5,000 people, began initially with the establishment of the European Site for Systems Manufacturing (ESSM) where desktop PC systems and motherboards were produced.

The first wafer fabrication plant – known as Fab 10 – would soon follow and with its opening Ireland became the only location in Europe to manufacture Intel microprocessors. Over the following decades Fab 14 and Fab 24 were added to the Intel campus and in recent years, all the manufacturing space at the Leixlip site underwent an upgrade project that enabled Ireland to be a key location for production of Intel’s 14nm process technology.

Development of the Leixlip site continues today and in December 2018, Ann Kelleher, Senior Vice President and General Manager of Manufacturing Operations at Intel, provided an update on plans to invest in the expansion of Intel’s global manufacturing network, including Ireland.

In recognition of the strong partnership that Intel has shared with its local communities in North Kildare over the past 30 years Ann Kelleher unveiled a specially commissioned sculpture which is to be installed in the Leixlip Town Centre to commemorate Intel Ireland’s 30th Anniversary.

The sculpture, which was created by Irish blacksmith John Hogan, is a beautiful piece of hand forged ironwork that depicts through its delicate butterflies a natural scene. The sculpture was presented to Dr. Ena Hanlon, an original member of Intel’s Community Advisory panel, who also spoke at the celebration event. Remarking on Intel’s relationship with the local community Dr. Hanlon said, “I would like to congratulate Intel on its 30th ‘Pearl’ anniversary and I want to thank the management and employees for being such wonderful corporate citizens who have cared for and partnered with the local community so well. Here’s to the ‘Diamond’ anniversary — another 30 years”.

The event was both opened and closed by the Leixlip gospel choir who had 30 members in attendance to sing for the special occasion.