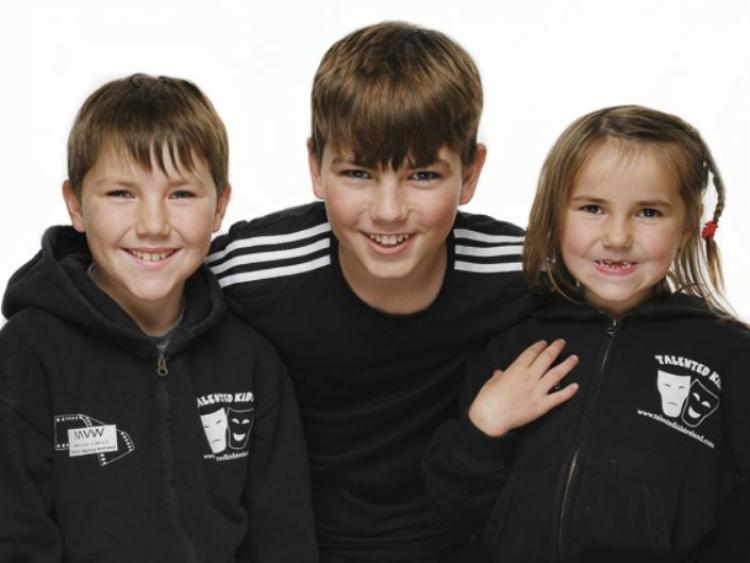 Brothers Phonsie, Tighe and Eliza Wardell from Dunlavin, all three are students of Talented Kids, and each feature in upcoming major productions

Maureen Ward of Talented Kids is no stranger to having her students feature in national productions be it live on stage, or on televised programmes and advertisements. She has seen many of her protegees star in short and full length movies but it’s not often that she has three members of the same family marking their mark as actors!

Brothers Phonsie (10) and Tighe (13) will be starring in the National Concert production of Oliver this year. Phonsie plays Oliver whilst his older brother plays Dodger.

“Both have been attending our classes in Kilcullen for many years,” says Maureen Ward, founder and tutor of Talented Kids Performing Arts School & Agency.

“But it’s not just the two boys that have talent as thespians; their little sister Eliza, aged 5 years, is starring in ‘Fritzie’, an animated programme for RTÉ to air in 2020,” said Maureen.

The children of Sarah and David Wardell, the family live in Dunlavin, on the Kildare-Wicklow border, and are all keen equestrians.

“Phonsie has already built up an impressive resume in TV, film and theatre,” Maureen told the Kildare Post. “Alongside his brother Tighe, he has been cast in Goodbye Darling, a short film; Michael in The Invisible Boy short film; he was the voice of Marco in an animated production called Captain Sabertooth which will air in 2020, along with major roles in Mary Poppins, Grease and now, Oliver at the National Concert Hall.

“Tighe is delighted to be playing Dodger alongside his brother Phonsie,” continued Maureen. He has been very successful to date, and has featured in a multitude of TV, film and stage productions over the years, including the part of young Alex in Love; Rosie, a feature film, Muse, also a feature film and multiple commercials for Smyth’s and Glenisk.

“His recent credits include Pinky in the 2020 animation Captain Sabertooth, Charlie in The Invisible Boy short film 2019 and Ballybradden, an RTÉ animation in 2019”.

Talented Kids has enjoyed unrivalled success in recent years with students featuring on TV soaps, animated films, stage, etc. Robyn Dempsey from Kilcullen was selected from a national search and will play the lead in a new RTÉ children’s programme, Tina Times Two.

“We have a mother and son, Audrey and Zach Carolan featuring in the toy show advert for RTÉ, Zach being a regular actor in Fair City which he plays young Fionn. We have six students including the lead role in Liberty Hall panto, Robin Hood and our tutor Johnny Ward (Ciaran in Fair City) is just recently back from his national tour with Dancing with the Stars; he will be playing Abanezer in the Aladdin panto in Limerick.”

A busy month so for Talented Kids. Oliver runs at the National Concert Hall from December 27 to January 3, 2020, starring Tighe and Phonsie. Bookings at www.nch.ie or box office 01 417 0000.