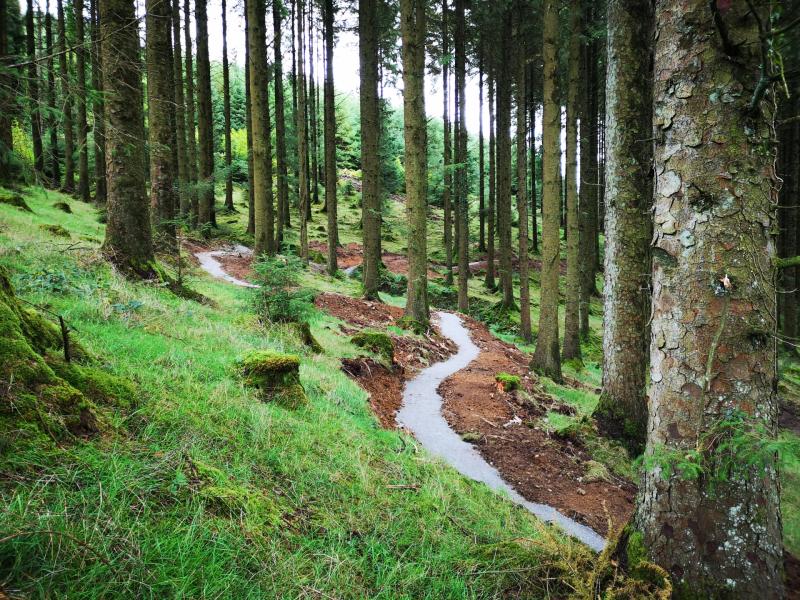 The first new section of the Slieve Bloom Bike Trails

The cross mountain trail is under construction by Coillte for the past 18 months.

Laois County Council has confirmed that about 21km will open by the end of December, half of it in Laois, starting from Baunreagh near Mountrath.

“The first phase of the Slieve Bloom Mountain Bike Trail is progressing steadily. It is envisaged that this phase will be completed shortly. The completion of Phase one will see 21,579 meters of the trail constructed in Laois and Offaly,” the CEO John Mulholland stated in his management report at the November council meeting.

“By the end of December it will be open to the public,” he added.

If a new bicycle is on your Santa list, be sure to add a helmet as Coillte have advised that helmets should be worn on the trails, which have a varying level of difficulty for all users.

The next phases of the project have already got funding.  €3.25 million was announced last February from the Rural Regeneration Development fund. Another €1 million is pledged between Laois and Offaly County Councils and Coillte.

Coillte opened a 4km looped section of the trail in December 2018 in Kinnitty, Offaly to give people a taster. The trail will eventually offer 100km of exciting biking tracks, varying in difficulty, from Baunreagh in Laois across to Kinnitty in Offaly. It will also have a café on the Laois side.

The project is in the pipeline since 2010 with planning first sought in spring 2016. The first 35km was initially expected to open by summer 2017 but was hit by planning delays and then had to await funding. It is being built by Metro Construction.

The trail has been largely welcomed by local groups as it is promised to attract thousands more tourists to the Slieve Blooms and boost income for surrounding areas. A similar trail in the Ballyhoura Mountains in Limerick brings in about 40,000 visitors a year.