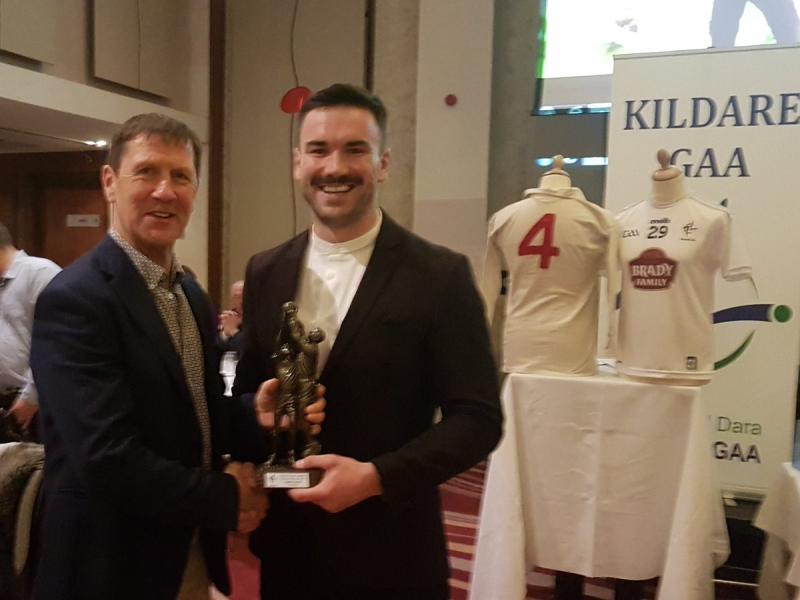 The Kildare Senior Footballers have been back training a couple of weeks and they will commence their O’Byrne Cup campaign at home to Longford on Saturday afternoon.

Before looking forward though it’s a perfect time to reflect on a rather mixed 2018 as Kildare look to improve their fortunes.

Fergal Conway was the standout player throughout the season as he kicked three points in the qualifier defeat to Tyrone and scored a wonder goal in the Leinster Championship Replay win over Longford.

As a result of his performances the Celbridge midfielder picked up the Kildare Senior Footballer of the Year award last week and he admits despite his individual accolades that it was a disappointing campaign.

“A few of the performances we put in during the year you wouldn’t really be happy with as players and no matter how well I played individually it doesn’t really matter if the team is losing as it’s all about results and especially in the Leinster Championship games with Wicklow and Longford and the Qualifier with Tyrone we didn’t give a good account of ourselves so it definitely finished on a disappointing note but looking forward to the year ahead”.

“It was a stop start season and when you think you are getting some momentum something would put us back in our place. Even reflecting back on the previous year when we had the Super 8’s and Newbridge or Nowhere where we had good performances a lot of the lads that made up the bulk of that team were either injured or out of form so results were a bit disappointing”.

Cian O’Neill resigned from his post as Kildare manager a couple of weeks after the Lillywhites departed the Championship scene with Jack O’Connor coming in.

“Jack O’Connor is a big addition to us and we are very lucky to have him and along with Ross Glavin there is great experience there and we are really enjoying it at the moment”.

“There is a lot of experience and know how in the management team and there is a big panel there at the moment. The shoulder is to the wheel in preparing for the National League and the three boys have us in a good place heading into 2020”.

“Training is as enjoyable as it can be for this time of year and like every other team there is a lot of work to do. We are trying to build up that fitness base before the first League game “, Conway admitted to Kildare Now.

In less than two months time Kildare will face off with Fermanagh in the opening round of the National League and getting out of Division 2 is something that are keen to achieve.

“We take each game as it comes and no doubt the League will be a big priority, we had a good chance to get promoted against Donegal last year and didn’t perform so we have to improve. We as a squad want to get out of Division 2 as Division 1 is where everyone wants to be in facing off against the best”.

Conway is currently sidelined with a hamstring injury so is unlikely to be available when Kildare kickstart their season on Saturday but he is bound to be a huge asset to Jack O’Connor throughout 2020.