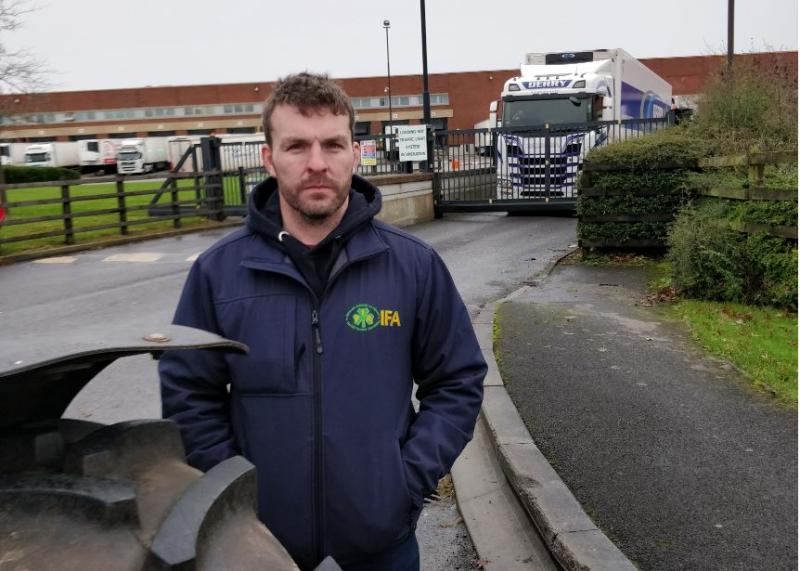 Kildare farmers joined IFA President Joe Healy and IFA branch members from across the country at a farmers protest this morning in Naas, in what clearly was the farming community saying: “We've had enough!”

After talks earlier this week failed to return any significant response from the government or any of the key stake holders, the IFA united and launched a significant protest outside Aldi's distribution centre off Newbridge Road, Naas, this being one of the retailer's biggest centres in Ireland.

At least 40 members of the IFA were present, including IFA national president, Joe Healy; Kildare and West Wicklow President Brian Rushe from Carbury, plus IFA members from West Wicklow, Offaly, Laois, Kilkenny, Cork, Mayo and Galway, among others.

IFA President Joe Healy told Kildare Now the IFA and the wider community were bitterly disappointed with the failure of a Beef Taskforce meeting earlier this week to reach any positive outcome, that is, to address the shockingly low prices Irish farmers are achieving for their beef per kilo.

“We went into those meetings with a different mindset” he said. “But at the end of the talks, the best they could offer was to relay the message back to government and the meat processors, etc. They didn't need that meeting last Tuesday to get that message.

“All that Irish farmers want is to get an immediate increase, a fair price for their product” he stated. Standing in front of the huge distribution centre outside Naas, the IFA President stated “the retailers have a big role to play in the issue - distributors like Aldi here today."

Mr Healy cited that Irish beef comes in the top five for carbon footprint in Europe.

“We are expected to produce that meat and sell it at 50c below our market competitors. We deal in facts; in the summer, the price difference for farmers in Ireland and those in the UK was significant.

“Two weeks ago, a Bord Bia price index showed we were 45c below our UK competitors, our biggest competitors and the most recent one this week showed a 50c price difference - or the equivalent of €200 per animal. That is simply not acceptable, nor sustainable for the farming community.

“Retailers talk about their corporate responsibility and sustainability but we want the Aldis and the other big retailers to get the message back to the meat factories to increase the prices paid to Irish farmers. All we want is a fair price for our top quality meat products” stated Mr Healy (below at today's protest outside Naas). 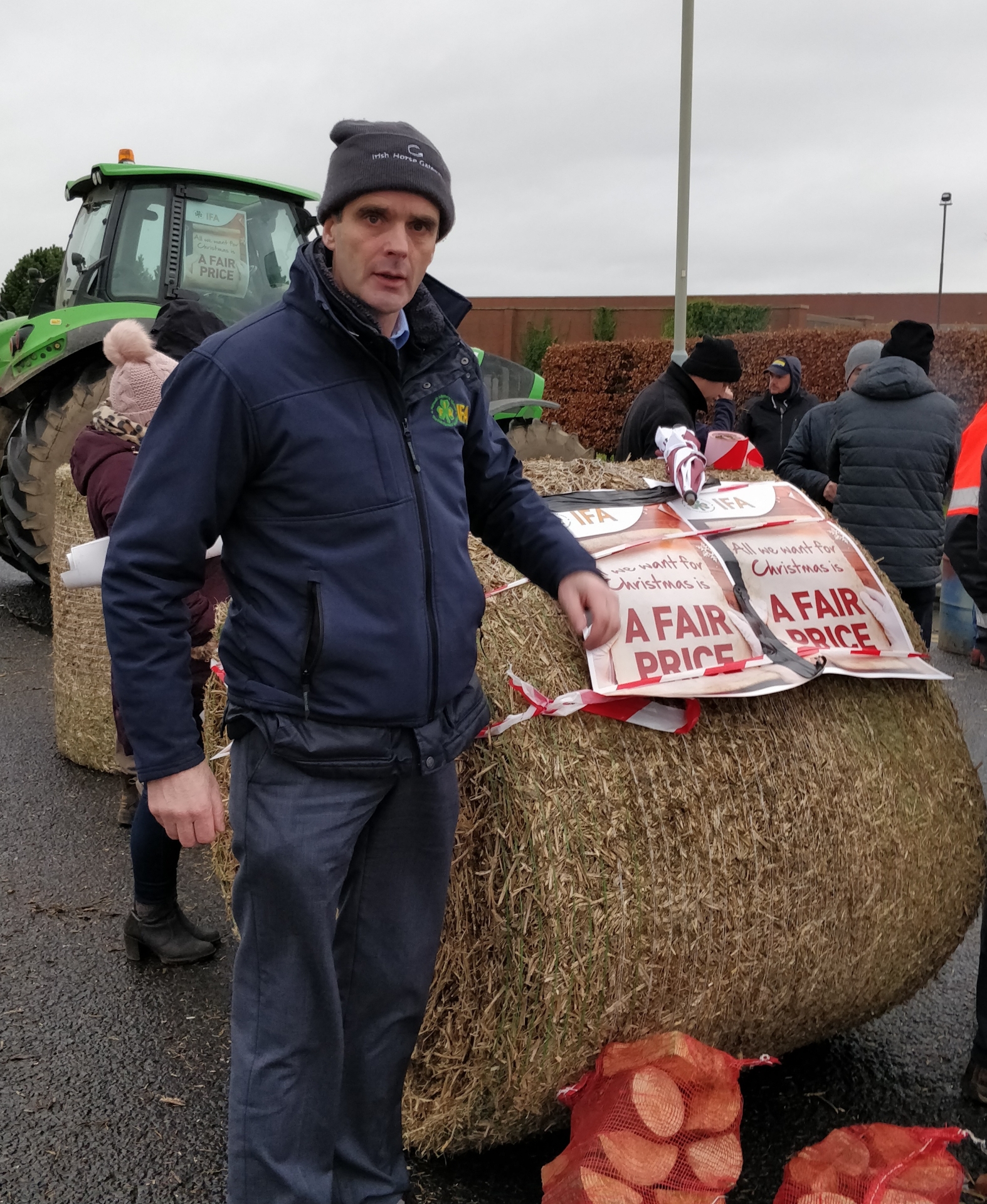 “Aldi is extremely disappointed by today’s IFA protest at its Naas Regional Distribution Centre.  We welcomed the resumption of the Beef Taskforce this week and have engaged positively with farmer representative organisations on the beef issue over recent months.  Aldi has a policy of open communications with all of its stakeholders, including the IFA.

“To be very clear, Aldi received no request for engagement on this issue from any member of the IFA leadership, no communication about specific concerns about the mechanics of the beef market, including age specification, and no warning of any grievance the IFA had before this morning”.

Mr Healy stated: “We handed in a letter based on the facts from the meat price index to Meat Industry Ireland and to the Minister for Agriculture, Food and the Marine, Michael Creed, TD on Monday week. Yet the Beef Taskforce meeting on Tuesday still resulted in no price increase offers.

"All day Tuesday and Wednesday, nothing offered, so hence that's why we're here today, till 7pm and hereafter, we'll be elsewhere. Farmers mean business based on facts the Bord Bia price index clearly shows that the markets we are going into, the UK, German and European markets, Irish farmers achieve significantly less than their competitors per kilo.” 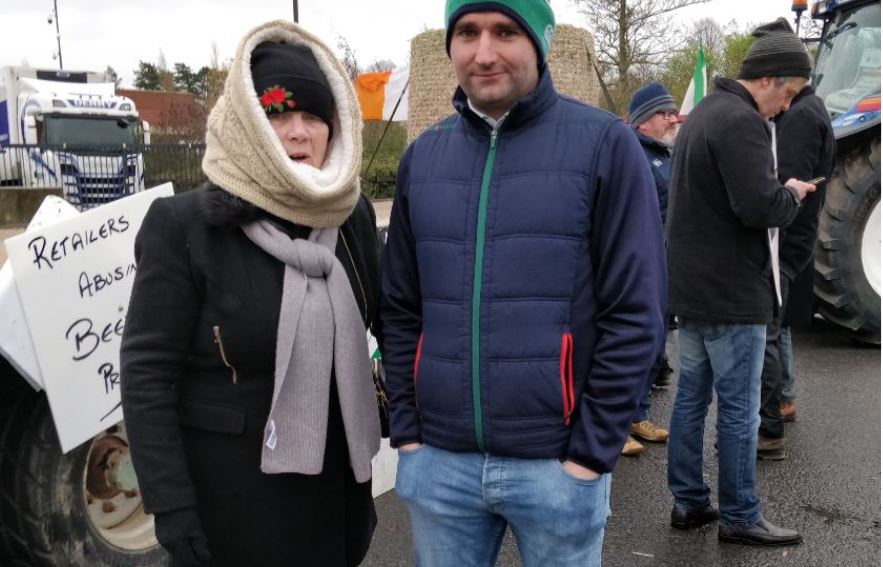 Mr Healy felt the general public appreciate the farmers' crisis stating they know it's a quality product, it's safe and carbon efficient in its production. “The very least we can do is to protect the sustainability of the people who are ensuring that safe product.” 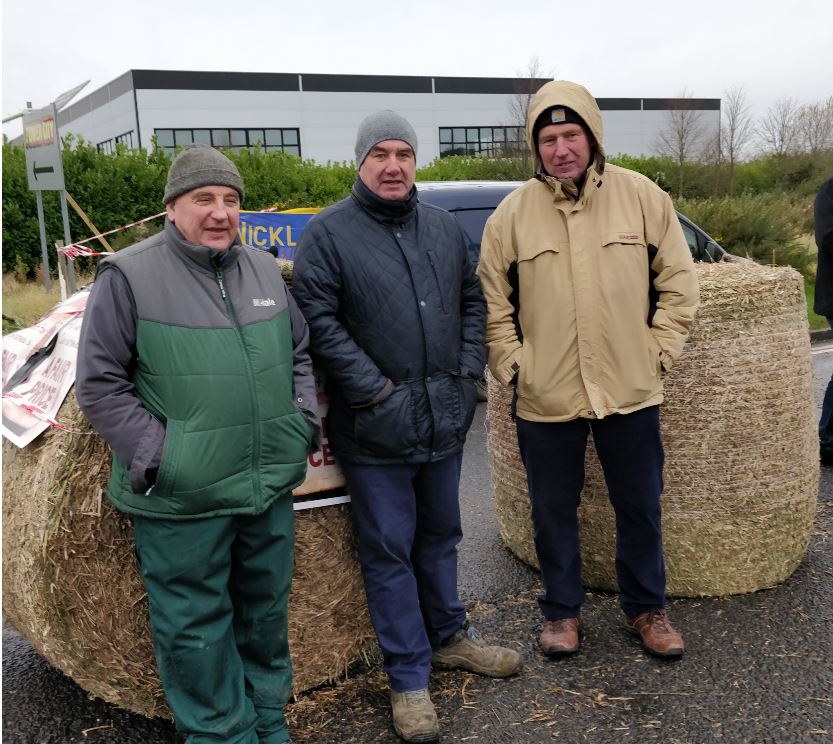 “Beef prices are rising across Europe, in the UK and around the world. The UK is our biggest market; world market prices are rising and yet, our price is way lower; in the UK, farmers get 50c a kilo higher than our farmers here in Ireland get for exporting beef.”

Both Mr Healy and Mr Rushe referred to the Bord Bia price index, stating farmers are achieving €3.40 per kilo in Ireland.

“And now we have to compete against Brazilian meats; if we produced beef in the farming conditions they do in Brazil, we'd be jailed! Processors are using current conditions to keep pressure on farmers to keep prices down but you have to understand farmers need to see an immediate price rise.

Mr Rushe and fellow farmers at the protest felt the government and the major stake- holders were not taking the issue seriously. “If they say they value our product, why don't they reward us for that service? It's a shocking indictement of where we are at".

Aldi stated today “Aldi is fully committed to co-operating with the Beef Taskforce and met with one of the representative groups, the Beef Plan Movement (BPM), as recently as last week to further update our position.

“As part of our preparations for the Taskforce, we have initiated research on a wide range of beef products to determine a number of issues. Our work also includes a complete review of procedures and processes with our suppliers to ensure we are meeting all customer and market requirements”.

Mr Rushe stated: “People value the quality and the welfare standards we have to adhere to. We are the most vulnerable link in the supply chain and if we don't get a substantial increase, we'll have to intensify our protests”.

The Department of Agriculture, Food and the Marine responded with a brief comment when contacted by Kildare Now:

“Farmers should be paid the maximum price that the market will allow. Positive engagement through producer organisations and the Beef Market Taskforce is the best way to progress farmers interests”.

The protest will finish at 7pm tonight.