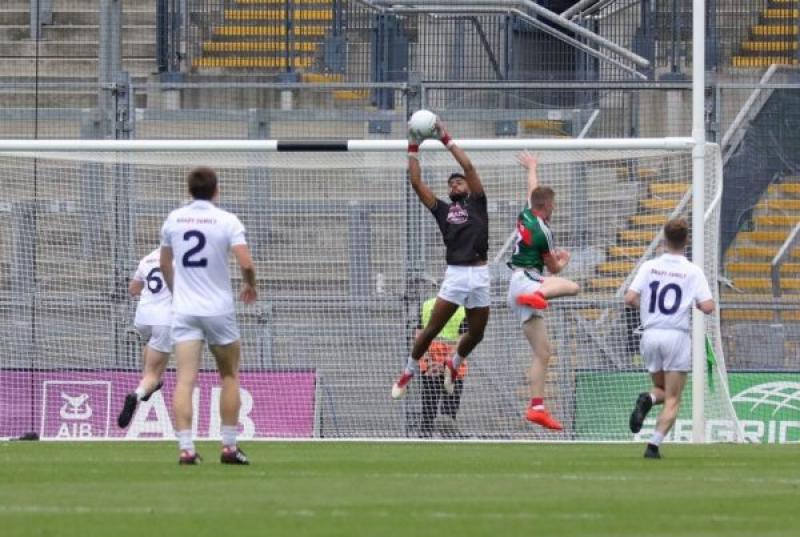 Aaron O'Neill pictured during last year's Under 20 All Ireland Final took part in the AFL Combine over the weekend.

The AFL's now annual European Combine was held on Friday and Saturday at the UCD Campus.

Among those in attendance were Carbury’s Aaron O’Neill and Clane’s Shane O’Sullivan and the Kildare pair were among a 20 strong group of AFL hopefuls who took part.

Aaron O’Neill is pushing strong to be Kildare’s number 1 goalkeeper this year and he admitted that it was a huge honour to be classed alongside the best footballers in the country at his age grade.

“It’s great to be seen up with the top lads at your own age athleticism wise and it’s great to get that recognition”.

It’s a great experience above anything else as every three weeks you are doing a training session with the best footballers in the country and you get to spend the weekend with them so it’s great”.

“It’s a tough couple of days as you are there from Thursday Evening to Midday Saturday so when you’re working hard its tough going. You are trying to impress so everything is at 100 miles per hour and while you do get rest periods when you’re working you do it full pelt and there’s no such thing as half measures really”.

The 20 year old is hopeful that he did enough to impress the many scouts over the weekend.

“Personally, I feel I did alright and each scout would have been looking for different things on their team so it all depends whether you fit the mould for them be it on quickness or agility etc”.

“I was relatively happy with my results but at the same time I would have liked to have done a little better as you always feel you could improve. If I did it again in a few months I think could do better again”, O’Neill said.

After the event AFL talent ambassador Kevin Sheehan gave an update on the progress of all the players.

“They are elite athletes and as good as what we have in Australia”.

"You don't jump to conclusions based just on someone's speed time, but it does suit that they can break the lines and we are after fast athletes.

"It's inspiring to be in this environment. The kids want to give it their best, alongside like-minded guys from all over the country who have played against each other but never met.

"They're on a path that's quite uncertain but exciting."