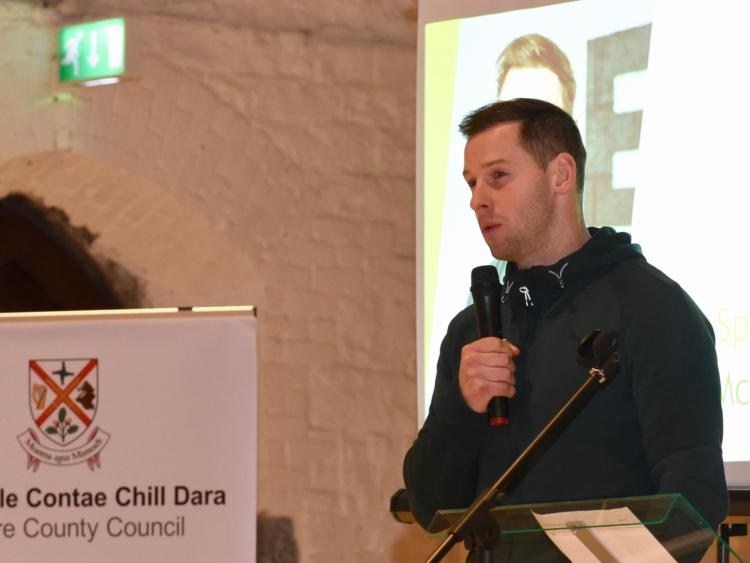 Dublin footballer Philly McMahon spoke persuasively at the Monday evening, December 2, meeting of the Kildare County Joint Policing Committee about the need for society to take a much different approach to drug addiction.
After he had assured those present he wouldn’t be talking about the recently announced departure of Jim Gannon from the Dublin team, he told the story of his older brother John.
The McMahons grew up in Ballymun “which was created when Dublin corporation decided to move 20,000 people from the inner city out to an area between the inner city and the airport”.
Silogue was the area of Ballymun that they grew up in, which was next to Glasnevin, but separated from that area by a big wall.
“So just think of that for a second. You know, where would you see a wall dividing communities. Well most recently it’s Donald Trump talking about, you know, the Mexicans and we’ve seen it up the north with the religious divide.
“But Ballymun had a wall that divided the social class.”
He told the story of his older brother John who had had a rough time of it. When he was young he started mitching and getting involved anti-social behaviour.

He said that in the early 1980s drug dealers spotted that they had “20,000 people in a condensed area, uneducated people, which is central to that area”.
At the age of 14, his brother started going through the cycle of cannabis, ecstasy, acid, although cocaine wasn’t a big back there.
The cohort of boys he hung out with at the time ended up being heroin addicts and a lot of them ended up in prison.
Very few of them actually became clean, and four of them died.
At the age of 17 and 18 John was working, but was a functioning addict. But eventually the drug taking caught up on his physical appearance. As his voice began to change his employer noticed and let him go, but he had a €20,000 to €30,000 per annum habit to feed.
His next option was to steal from the home, and his parents realised what was going on and threw him out. So he started dealing drugs and he got caught.
“You lose all self worth, all ambition. You wake up every morning and your only ambition is to get the drugs,” Mr McMahon explained.
His brother ended up in St Patrick's in Mountjoy. He was on drugs before he went in, while he was there and when he got out.
“So the purpose of St Pat’s didn’t work.”
John’s best friend had been clean for two years and following a fight with his girlfriend, went back to his father’s house, took a hit of heroin which was too powerful for him, and overdosed.
John and Philly’s parents said ‘enough is enough’ and sent John to London. He went and got clean because he didn’t know any other addicts and he was in a good place, says his younger brother.
“He tried to reintegrate into the other aspects of society, tried to get a job or make new friends and unfortunately society constantly put barriers up against him and he was still seen as a drug addict.
“So he goes back and re-associated with the people who he felt respected him and he goes back on drugs. And he goes on a cycle of going on drugs and then back on methadone, which is a legal drug the government gives you, to make you more functional.
“But methadone is actually harder to get off than heroin.”
Eventually John hit rock bottom, “which is the magic potion to actually get off drugs,” Philly explained. “Unfortunately rock bottom is actually close to death.”
John was five days away from going to rehabilitation when he died of heart failure.
“All the bad choices he made would have an impact on his younger brother who was seven years younger than him.”
What he learned from his older brother’s mistakes was, he says, to challenge the standards of his culture.
“So what are those standards? Well if you grow up in Ballymun, the majority of people will think that you have to drink, take drugs, commit crime, don’t go on to further education after school.”
More importantly, the pain and suffering he saw his older brother go through helped him develop a purpose in life, to help addicts and to set up a charity called Half Time Talk in his brother’s name.
“A halftime talk is a sort of significant event that happens in your life that changes the standards of how you live. It can be a bereavement like me, it can be mental health, it can be addiction, a divorce or a mid-life crisis.
“But it leaves you understanding life a little bit better than you used to.
“I'm trying to use my brother's experiences and my experiences, to go around the country to get people to have a half time talk.
“Because ultimately, we don't know when our time is up. There's nobody in this room knows. All it takes is for one person to believe in a young person, and they get a huge impact on society.”
Mr McMahon also spoke of the wider societal responsibilities around drug use.
“When we see somebody on the street, who is homeless, who is a drug addict — we have created that.” e saw a clear and distinct link between inequality and mental health issues, and drug addiction. Studies show that one in five will experiment with drugs and alcohol and 10% will become addicts.
“So the question is why is that? Well, a lot of those 10% will struggle with mental health and to overcome the pain and suffering they will take drugs. And when they become addicts, society will push them away, because that’s what we’re told to do. It’s against the law to take drugs to overcome pain, so we’ll treat you bad.
“And we’re leaving these people on the streets. That’s somebody’s brother, somebody’s sister, somebody’s daughter, somebody’s son. Unless it’s directly in our home we just don’t care.
“So with that in mind, my brother had 31 minutes in his game, and then he was taken off, didn’t get a second chance.”
He hoped that everybody in the room could bring a little more empathy towards people who are struggling with addiction.
Later during the discussion, he noted that “we’ve been educated in society to look negatively upon people who are addicted to drugs.
He is in favour of the model adopted in Portugal where drugs are decriminalised and the money previously used to prosecute drug addicts is diverted into the health service to help them - and in catching drug dealers.
“The key to it, is people, and bringing them closer together. He also outlined how the economics of our current approach to drugs addicts makes no sense. It costs hundreds of thousands of euro to keep people in prison, whether as juveniles or as adults, whereas, he said, an early intervention in their lives to help them overcome drug addiction could be €50,000.
Unknown to all who attended the Joint Policing Committee meeting last Monday, Mr McMahon would be in Kildare again in a matter of days for his wedding.

The All-Star recipeint married his long-time partner PR guru Sarah Lacey in a lavish ceremony in Crookstown on Saturday.
The pair said "I do" in SS Mary and Laurence Church in Crookstown before attending a lavish reception in Kilkea Castle.
Philly looked dapper in a three piece black tuxedo which included a velvet jacket, round waist coat and cropped trousers.
And in a lovely and heartwarming gesture, he paid tribute to his late brother and late father by adding a picture of them to his cufflinks.
His look was finished off with a dickie-bow and a pair of loafers.
The newlyweds were joined on their special day by a number of a high profile names, including Dean Rock, Kevin McManamon, boxer Bernand Dunne and Dancing With The Stars favourite Denis Bastick.
Team captain Stephen Cluxton, Eoghan O'Gara, Brian Fenton and Ciaran Kilkenny also toasted to the happy couple.
The couple got engaged last December, after the seven time All-Ireland winner popped the question under the Northern Lights during a romantic holiday to Iceland.