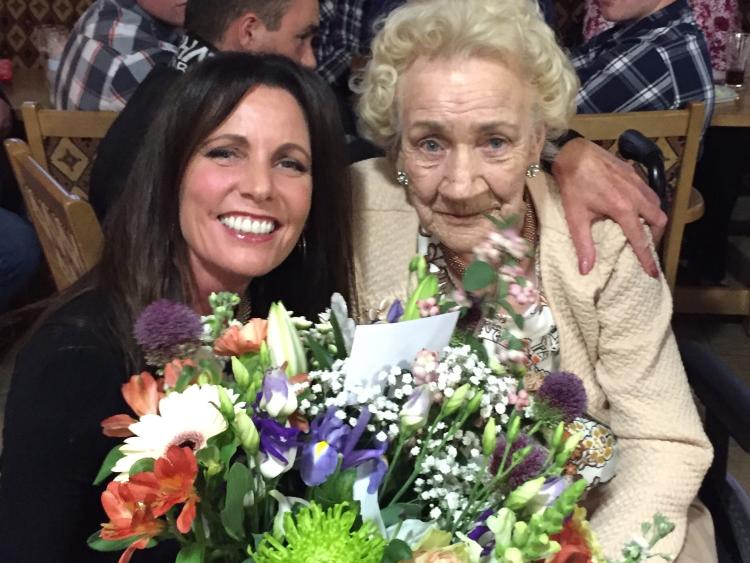 Allenwood will have its first ever Goal mile on St Stephen’s Day, Thursday, December 26, an event organisers hope will attract attendees from the local community and further afield.
The impetus for the event came from local woman Celine Cronly, who suffered the bereavement of her mother Sheila earlier this year.
Sheila Cronly, nee Brennan, formerly of Ticknevin, passed away on March 11, survived by her husband Pat, daughters Mag, Jemma, Celine and Vera, son PJ, grandchildren, great-grandchildren and extended family.
Celine admits that she was feeling sorry for herself in the months that followed, but that evolved into a determination to do something positive for Christmas, knowing that for many it can be a tough time.
She has a running background, even completing the marathon this year — although she is keen to add that “I’m no Sonia O’Sullivan” — so she hit on the idea of initiating a Goal Mile in the Allenwood area.
As is turns out, Celine, a garda stationed in Blanchardstown, will be working on Christmas Day so the run will take place the day after.
She contacted Goal, and a couple of locals who she thought might be of help, and the project has gathered momentum since then.
Gardai have agreed to do traffic and the owner of the local Spar shop has sponsored refreshments. Meanwhile Frank Moran, Brendan Wyse and Enda Grace of Dundara TV have all pitched in to help.
Local footballers Johnny Doyle, Jimmy Hyland and Johnny Byrne as well as runner Dave Matthews, and ladies footballer Michella McKenna will take part in the event.
The run will start at the Spar at the cross, make its way to the canal, before turning left and going along the canal until they reach half point, at which point they will simply turn around and come back.
Celine explained that the nearest established Goal Miles in the area are in Clane and Edenderry, so Allenwood will cater to a large swathe of countryside in-between, including Robertstown, Ballyteague, Kilmeague, Coill Dubh, Killina, Ticknevin and Cooleragh. She said it would be great to see people coming from all those areas.
The event will run from 10am to 12 noon on St Stephen’s Day, with a race at 11am, for the more competitive among the participants.
A Facebook page has been established ‘Goal Mile Allenwood’ with details of the event.

Meanwhile, a record number of Kildare people are expected to take part in Ireland’s favourite festive fundraiser, the Goal Mile, which takes place in 13 locations in the county over the Christmas period. The events will take place on Christmas Day, St Stephen’s Day and on on January 2.
On Christmas Day they will take place at Naas GAA Club, Sallins Road at 11am; St Conleth's Community College, Station Road, Newbridge at 11am; Johnstown Bridge GAA Grounds, at 11am; Bishopland, Ballymore Eustace at 10.30am; North Kildare Rugby club at 11.30am and at Carton House Golf Courtyard, Maynooth at 12pm noon.
On St Stephen’s Day they will be at Manzors Car Park, Clane at 10am; Clogherinkoe/Broadford GAA, from 12pm; Le Cheile Athletic Club, Leixlip at 11.30am; Kingslane, Kilteel at 10.30am and as mentioned above, at Allenwood Cross from 10am-12pm.
The last Goal mile of this season will be on January 2 at St Catherine Park, Leixlip from 11am-12pm.