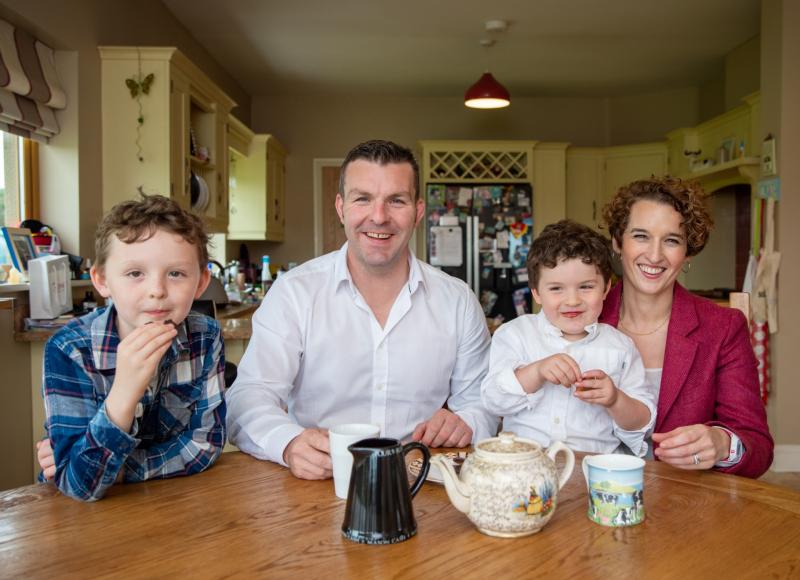 Brian Rushe and his family, Rebecca, sons John and Rhys

Fresh from winning the IFA Deputy President campaign, Brian Rushe has paid tribute to those who voted for him.

The Carbury man was elected the next Deputy President of the IFA ahead of Thomas Cooney by 34 votes at the count this week.

“I want to personally thank the 11,379 farmers from across the country who voted for me. I cannot fully describe how thankful and appreciative I am to all of you who have put your faith in me to help drive the IFA forward. I promise to repay that faith.

“To the 11,345 who voted for Thomas, I pledge to fully devote myself to the position of Deputy President of this great organisation.

“Like agriculture as a whole, we face many challenges in the IFA and I know the road ahead will be difficult but nothing worth fighting for came through the easy route. Each of our sectors face enormous challenges from CAP reform to Brexit and from the price pressure on the food we produce to increasing bureaucracy. We must fight to stop the squeeze on farmers and the only way we can do this is by being a united, singular and determined IFA.

“I pledge to work for all farmers across the country. There can be no divisions among farmers. We all must have a common goal for delivering sustainable income for our farm families. Farm incomes are my number one, my number two and my number three priorities.

“I thank Thomas Cooney for what was such a gripping and enthralling campaign. This was democracy at best. We both presented ourselves and our manifestos to the electorate for them to decide and it is heartening to see such a strong turnout. I know Thomas will continue to be a strong and positive voice in the IFA.

“I could not have done this without the support of my wife Rebecca, our sons John and Rhys, the rest of my family as well as my hugely dedicated team of campaigners and supporters across the country.

“Finally, I am excited and rearing to get going along with the rest of the IFA leadership. I know working with the next President Tim Cullinan, we can safeguard the future of this generation’s farmers as well as the next.”