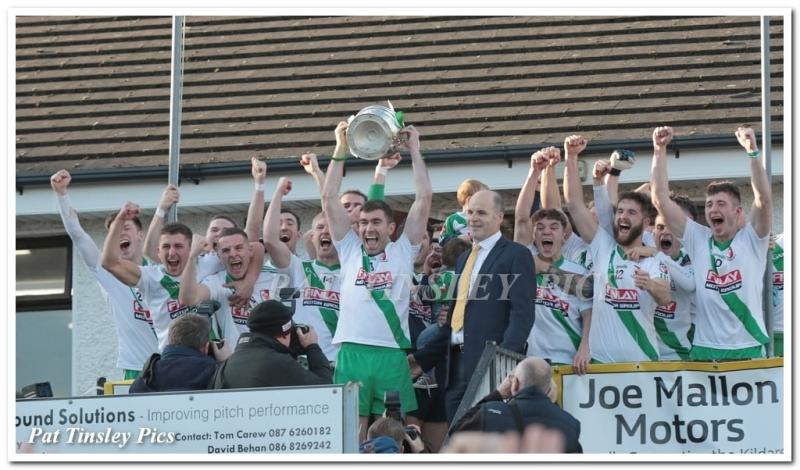 It was a decade that was dominated by the Newbridge Clubs with Moorefield and Sarsfields accounting for nine of the ten titles.

As a result two thirds of the team of the decade was taken as a mixture between the two.

Only two other teams reached County Finals with Carbury themselves making successive deciders in 2011 and 2012 while Celbridge lost to Moorefield in 2017.

Celbridge can count themselves fairly unlucky to have no player on the side with all of the other above clubs being represented.

A real close call with himself and Tom Kinsella but after minding the nets for the majority of the decade the experienced Sash stopper gets the nod. He proved to be a steady influence in helping Sarsfields to four titles.

The first of the dependables in the Moorefield defence. He broke into the team at the start of the decade and hasn’t looked back as he gets better with age. Even got forward for the rarest of points in this year’s County Final.

One of only two Sarsfields men to captain the club to Senior Championship glory on more than one occasion. Has been a huge leader for the club in some tough times and in an emotional year he played a starring role in the Championship victory just passed.

He could have found a place anywhere in the half and full back line but he started in the corner for the 2011 victory as a 17 year old. He’s gone from strength to strength since then and played a big part in getting Athy to two more finals.

The second of the Moores dependables and you could put your life to this as he more often than not performed to a high level and will be forever remembered for kicking the last gasp winning point in the 2017 Leinster Final.

The first Athy County winning captain in twenty four years when they ended a long wait in 2011 and he was the driving force behind it. The season came on the back of an All Star with Kildare in a period that was the best of his career.

He will be hoping the ship hasn’t sailed but can count himself very unlucky not to have won a Senior Championship medal. The older Flaherty brother was brilliant in both 2011 and 2012 and continues to put in impressive performances for Carbury to this day.

One of the main men that gave Moorefield the hard edge that made them so good.  In his peak at the start of this decade he was still incredibly underrated and it was no coincidence that the likes of Ronan Sweeney, Aaron Masterson, David Whyte and Ross Glavin have shone alongside him.

Had many battles in the middle of the field with the man above and gave the Sash plenty of bite in crucial areas. Never lived up to his potential with Kildare but was a huge asset to a club that goes down through the generations of his family. Made the midfield spot his own throughout.

Outside of a man that comes later on the list he has consistently been one of the best club players in Kildare. Time and time again he has produced in the Primrose and Blue and in some cases he has almost single handedly carried Carbury.

A bit of an unorthodox place in the team for Athy's main man but it’s where he played in the 2015 Final as well as a number of other occasions. He has been brilliant since returning from professional soccer across the water and was a key asset in the 2011 success.

They quite simply don’t make them like Roli anymore. A phenomenal club player that words barely do justice to. A key part in every one of Moorefield’s County Title victories this century of which he has nine medals in total. Unfortunately injury has curtailed his playing career but there is no better man to lead the Moores into the future as manager.

The mercurial Adam Tyrrell is capable of anything on his day and more times than not he has done that consistently in green. His performance in grinding his team back level in the 2014 draw with Sarsfields is a particular stand out. Came of age in a Kildare jersey this year and showed what he’s capable of when given the chance.

Cahill was Sarsfields main man throughout a stunning  period for himself. Who will ever forget his devastating performance in the dramatic 2015 Final against Athy where he scored nine points. He looked destined for bigger things at County level but it never quite happened for him. Can take great solace in being the Sash's main man though.

The move from Kerry to Kildare of Eanna and his brother Cian really transformed the fortunes of Moorefield. He was the type of forward the Pollardstown based outfit lacked and helped move them to a new level and in taking the burden of Adam Tyrrell he was exceptional throughout their Leinster winning year.