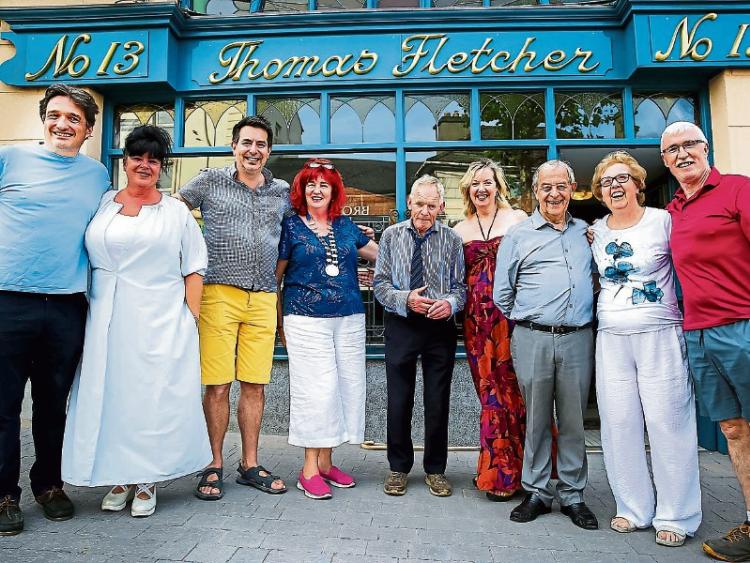 Tommy Fletcher with some loyal customers and friends before the sale. Picture: Aishling Conway

Such was the historical and social standing and significance of the pub to the town of Naas, the sale, in Lawlor’s Hotel, attracted considerably more witnesses than participants.

The pub, which was placed on the market at the start of June through Paddy Jordan, fetched well in excess of its guide price of €600,000.

An estimated 120 people turned out for the public auction which started at 3pm that afternoon — but just two serious bidders emerged to make offers on the property.

The new buyers are well-known local businesspeople Vincent O’Leary and Camilla Gray, who are behind the Lemongrass restaurants in Naas and Citywest.

They were not at the
auction but were represented by Alan Redmond of Redmond Auctioneers in Rathcoole. The other bidder, who was also represented at the auction, did not identify themselves.

While the large crowd gathered to witness the auction in Lawlor’s Hotel, it became very clear early that all but two of them were only there to witness the historical event of the sale of what auctioneer Paddy Jordan called “probably one of the most iconic pubs in Naas.”

Solicitor Cairbre Finan gave a run down of the legalities of the sale, including vital details such as that the vendor was Thomas Fletcher and that the building is a protected structure.

Gradually it ground its way past the million mark, as the two bidders pushed it bit by bit.

The drama was keen while each had to consult their buyer on the phone, which delayed the bidding just long enough to keep the tension high.

As the bidding crept agonisingly past €1,100,000, Paddy Jordan and Mr Finan went out of the room to consult vendor Tommy Fletcher.

At that point one of the bidders, his phone still glued to his ear, shook his head.

His client wasn’t prepared to go any further.

Mr Jordan looked around the room...

The hammer came down, and Camilla Gray and Vincent O’Leary were the new owners.

“And I hope it’ll be very lucky for you,” Paddy Jordan said.

Tommy Fletcher said he was happy with the outcome but didn’t know when he would be moving out.

However he assured everyone the pub would be open that evening.

Tommy Fletcher’s retirement marks the end of an era in Naas.

The pub was purchased by his father in 1931, and was for many years a grocery and a pub.

It reached legendary status through the tale of how Ronnie Wood of the Rolling Stones, in middle of an impromptu jam session in the pub several years ago, was told to stop playing.

Cllr. Vincent Martin, Green Party, was present at the auction and said he hoped that the building and its interior integrity would always be retained and secured.

“I wish Tommy, an absolute gentleman to his fingertips, happiness and success as he commences the next chapter of his life.

“I am delighted that this iconic building has been purchased by a local business couple with a local respected business track record and I wish them the best of luck,” he said.