Kildare scored 1-6 without reply in the final quarter 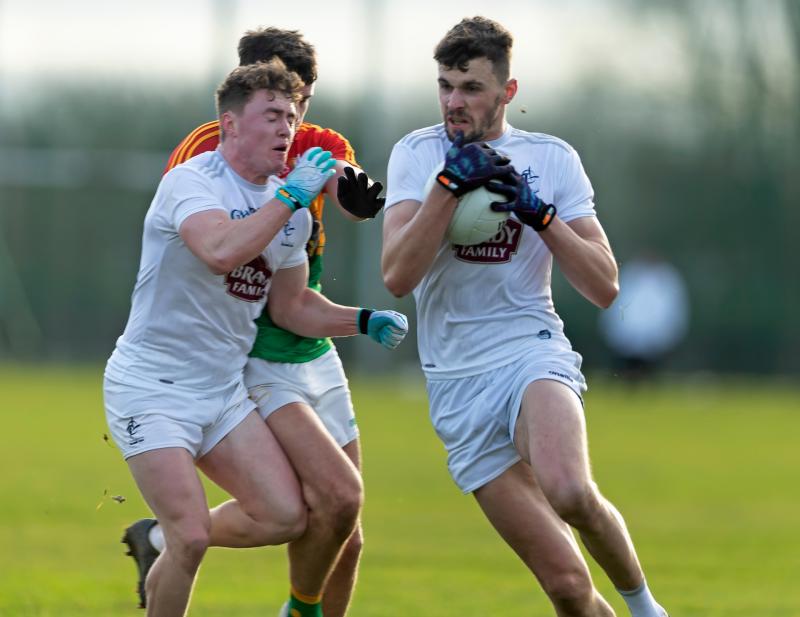 Kildare's Liam Power races on to the loose ball during the Leinster Series O'Byrne Cup round 3 game against Carlow . Pic: Sean Brilly

A 71st minute goal from Chris Byrne gave Kildare a three point success over Carlow in the final round of the O’Byrne Cup Group Stages on Saturday afternoon.

The dead rubber which was played in the grounds of the Institute of Technology Carlow saw Kildare fail to get going for up to an hour of the game but a devastating 1-6 without reply eventually got them the result with Byrne’s goal putting the icing on the cake.

It was a game where Jack Robinson and Daniel Flynn missed chances they would normally kick over in their sleep as Carlow made things very difficult for the visitors.

Trailing 0-10 to 0-4 with only fifteen minutes remaining Kildare did at least put on the afterburners late on with the bench having a huge impact.

Prior to the game even throwing in Carlow made four alterations to their originally named side while fellow school teachers in Scoil Mhuire Clane Liam Power and Paul Cribbin switched positions in Cribbin’s first game for Kildare since last March.

The Lillywhites were on the board within a minute of the start with Jack Robinson curling over a point on the near sideline.

Carlow playing in their usual defensive style soon found their groove with Paul Broderick knocking over a pair of frees before a fisted point had the Barrowsiders leading 0-3 to 0-1 after only ten minutes.

Kildare replied with a well taken point from Con Kavanagh before Daniel Flynn squandered a very scoreable marked attempt from in front of the goal.

The teams then exchanged scores with Jimmy Hyland and Niall Roche on target as only one point separated the sides.

Despite the close margin Kildare were proving very wasteful in front of goal with Robinson missing from a free like Flynn did earlier and Carlow finished the half the better.

Broderick’s fourth point of the half and his second from play came on the back of scores from  Darragh Foley and Eoghan Ruth as the home side went four points clear.

Kildare ended the scoring for the opening period with a well taken free from sub Neil Flynn but it was Carlow who had the initiative as they led 0-7 to 0-4.

The flow of the game continued in the Carlow direction upon the resumption with Broderick and Diarmuid Walshe extending the tally for Turlough O'Brien's side.

Things got even worse for Kildare when Paul Cribbin picked up a black card for an incident off the ball but despite being down to 14 men they still created a big goal chance with Adam Tyrrell seeing his shot saved by Robbie Molloy.

Kildare were chasing shadows for much of the second half and when Diarmuid Walshe made it a six point gap in the 55th minute Kildare looked in real trouble.

It was around this time that there was a change in tactics as they pushed up on the Carlow kickout and the introduction of the likes of Tyrrell, Aaron Masterson and the Ryan brothers gave Kildare momentum.

There points in as many minutes from Tyrrell and Jimmy and David Hyland got Kildare within range to strike in the final ten minutes.

In saying that though Carlow still had a glorious chance in the 59th minute to put the result to bed when Broderick raced clear of any white jerseys but he carelessly pulled his shot badly wide.

Kildare took inspiration from that miss with Tyrrell and David Hyland reducing the deficit to one before a fine John Treacy effort levelled up matters.

That man Broderick still had a free to win it late on though but his attempt went wide and minutes later Kildare took full advantage when a ball over the top went into the hands of Chris Byrne and the Clane man drove a shot into the top corner to give Jack O'Connor’s team the late win.