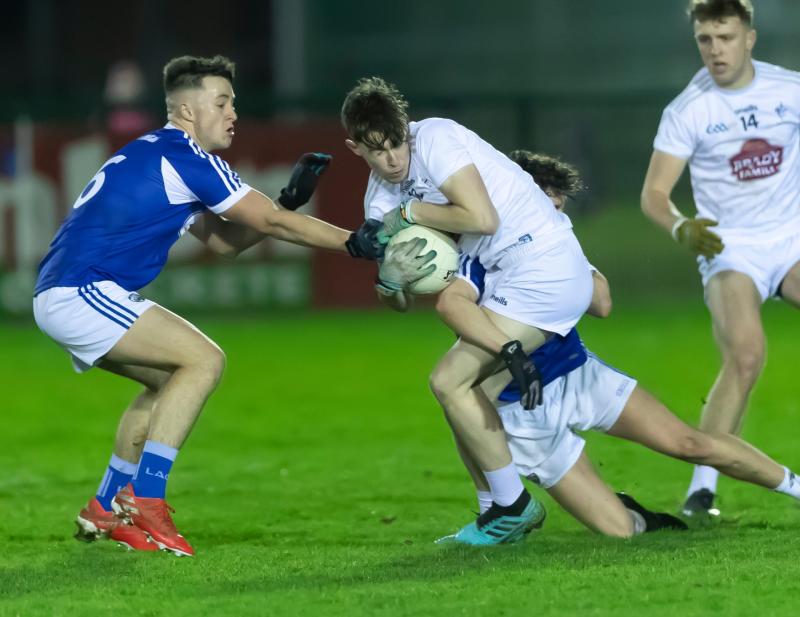 Under 20 John Kerins Cup Round 1

Kildare got their Under 20 John Kerins Cup campaign up and running with a thirteen point victory over Laois at Manguard Plus Hawkfield on Saturday Evening.

Adam Steed and James Behan got the Kildare goals in each half and it sets them up for games against Meath and Dublin in the coming weeks.

As well as the goalscorers Shane O'Sullivan also stood out in scoring eight points throughout.

Laois got the better of Kildare in last year’s Championship and they were competitive throughout the first half with Damien McCaul netting in the 12th minute but once James Behan did likewise down the other end the home side were in complete command.

The Kildare performance was all the more impressive given they were without their sizeable school contingent and it remains to be seen whether they will be available at all with a new GAA ruling sidelining them at the moment.

Kildare made a few changes prior to the start with Darragh Kirwan and captain DJ Earley sitting the tie out as manager Gay Campbell experimented with a number of players.

Kildare started brightly with Adam Steed pointing from distance after only a couple of seconds before the teams then exchanged efforts with a pair of Shane O'Sullivan frees being cancelled out by Dean Brophy and Damon Larkin.

That left the young Lillies with a 0-3 to 0-2 lead and it was extended when O'Sullivan nailed another free.

Laois then responded with Damien McCaul kicking in a goal to go in front for the first time.

The advantage didn’t last long though as O'Sullivan kicked successive frees and in the 21st minute Kildare had the ball in the net when a point attempt from Findlay Nairn was turned away by Matthew Byron only for James Behan being on hand to palm home.

Kildare kicked on after that goal with a brace of placed balls from O'Sullivan sandwiched by a well taken 45 from Adam Steed.

Laois stayed somewhat in touch with points from PJ Daly and Sean Michael Corcoran but it was the home side who held a five point lead at the change of ends.

Laois had a great chance to reduce the deficit almost immediately after the throw in when sub Ross Bolger got free but he slipped upon contact and Matt Anderson saved well.

From that point on and after a raft of substitutions Kildare eased away on the scoreboard with points from Steed and Behan.

Kildare also had a goal chance in that period but Findlay Nairn’s drilled attempt was blocked on the line.

Laois then steadied the ship with points from McCaul and Ross Bolger but the O'Moore County would get no closer with Steed kicking his second 45 before he buried a shot to the net in the 49th minute.

The St.Laurences man also had a shot rebound off the post but it mattered little as Kildare finished the game in style with points from O'Sullivan, Behan and second half subs Aaron Browne and Cathal McCabe.

Cian Doyle scored a late consolation point for Laois but it was Kildare's night and they can now look forward to a game with Dublin next weekend.