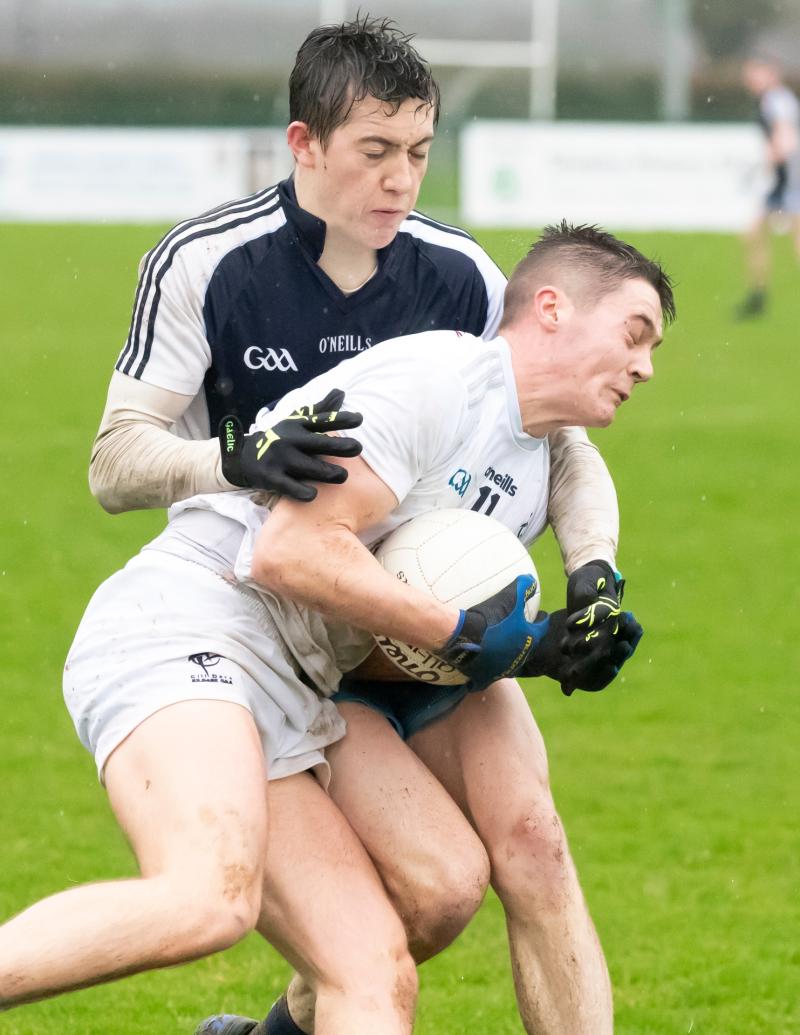 Under 20 John Kerins Cup Round 2

A late late Shane O'Sullivan free got Kildare somewhat out of jail as they drew with Dublin in the second round of the John Kerins Cup in a wet Manguard Plus Hawkfield on Saturday afternoon.

The visiting Dublin side were the better side for large periods and when leading by six points halfway through the second half they looked home and hosed.

Kildare didn’t throw in the towel though and despite having a mixed afternoon beforehand with the boot Darragh Kirwan scored the home side’s opening goal in the 54th minute and from there they set about reeling their opponents in.

The result means Dublin are now eliminated while near neighbours Kildare and Meath face off for a place in the Final next weekend.

After losing to Meath a week previous Dublin knew a win was imperative if they were to keep their League hopes alive and they started on the right foot in kicking the first four points with a free from Ciaran Archer coming on the back of a trio of efforts from play by Luke Swan.

Kildare eventually got on the board with a 9th minute Shane O'Sullivan free and the full forward then followed up with his only point from play a couple of minutes later.

Kilcock’s Eoghan Mulhall with a beautifully curled effort left just a point between the sides approaching the halfway mark of the half but Sean Lowry and Mark Hand with a couple of  quickfire points had the Dubs leading with a double scores advantage.

Between the 20th and 27th minutes Kildare got a bit of momentum going and it was all about O'Sullivan as he kicked four frees to edge the hosts in front.

It was still Dublin who went into the interval with the lead though as Hand and Lorcan O'Dell gave them a 0-9 to 0-7 buffer.

Both sides made a number of changes at the change of ends but it was Dublin who dealt with it better originally as they kicked four of the first six points including three in a row between the 37th and 42nd minutes.

Hand got three of the four points with sub Padraig Purcell also getting in on the act.

Kildare’s only response came via a couple of O'Sullivan frees and when Hand and Purcell extended their tallies to leave Dublin six clear going into the final quarter they looked in complete control.

What followed was an eleven minute scoreless period for Dublin and in that time Kildare found their form.

Darragh Kirwan finally registered on the scoreboard with a huge point from range before O'Sullivan reduced the deficit to just four points.

That point from play seemed to give Kirwan an added jolt of confidence as in the 54th minute he exchanged passes with Findlay Nairn and despite the Naas man losing control of the ball twice in the build up he remained composed to stroke a shot past Josh O'Neill in the Dublin goal.

Only trailing by a point Kildare looked primed to strike but that opportunity seemed to go when Purcell and Cillian McGuinness put Dublin four clear entering stoppage time.

Alex Beirne then kicked an incredible point in the 62nd minute but when Ciaran O'Reilly replied in kind for Dublin they looked to have done enough.

Kildare never stopped trying though and four minutes into stoppage time O'Sullivan stormed forward  before feeding Nairn who placed a shot into the bottom corner.

There was still a late chance to force a draw when Colm Joyce was fouled and for the ninth time O'Sullivan kicked over the free as Kildare snatched a draw to keep their final hopes very much alive.