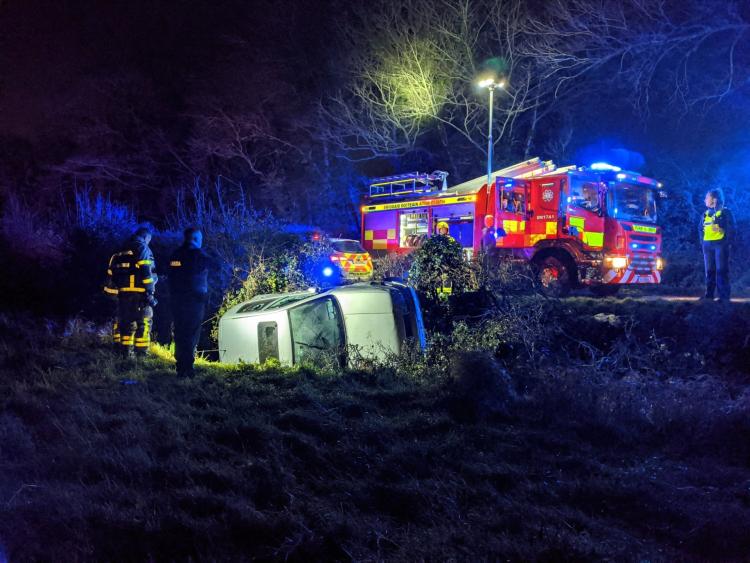 A car overturned at a roadside off the N7. Photo: Dublin Fire Brigade 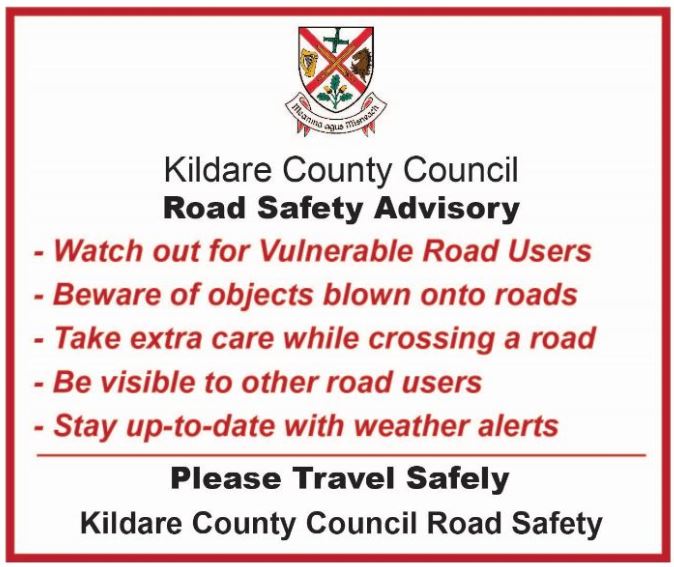 Storm Brendan knocked trees and cut power to around 2,500 homes and businesses across County Kildare today.
An Orange Alert was in place as gusts of up to 120 km/h were forecast by Met Eireann for the Leinster area.
Kildare County Council’s response teams were called to incidents throughout the day.
Trees blocked roads or fell on electricity wires in several areas of the county.
The R415 between Milltown and Allen Cross was closed for a time due to falling trees.
A fallen tree on the R448 between Kilcullen and Naas also resulted in the route being closed for a period.
Road users said trees were blocking routes in Ballymore Eustace and near Rathsallagh House outside Dunlavin.
There was also localised flooding between the Lidl roundabout and Toughers roundabout on the R445 between Newbridge and Naas.
The ESB said up to 2,5000 customers in County Kildare were without power for parts of yesterday and some of the areas worst affected included Prosperous, Allenwood, Brannockstown and Maynooth.
Road conditions deteriorated throughout the day and in the Baldonnel area off the N7, firefighters were called to an overturned car at a roadside.
Dublin Fire Brigade said road conditions were very difficult for road users with downpours and storm force winds.
Kildare County Council said its Severe Weather Assessment Team met regularly to discuss the impact of Storm Brendan.
Meanwhile unsettled weather comprising heavy rain and strong winds is forecast to continue until Thursday and the Council advised road users to take extra precautions as there will be a continuing risk of falling trees, debris and possible flooding throughout the county.
A spokesperson added: "Travel by cyclists and pedestrians is not advised."
Met Eireann said tomorrow [Tuesday] will see rain spread from the south turning heavy and persistent during the afternoon and local falls of sleet and snow are possible, mainly on high ground.
Wednesday night will see more rain which will turn persistent in places with strong winds also developing.
On Thursday, rain will become widespread again and will be heavy in places.
Met Eireann said it will also be windy with some strong and gusty southwest winds.
However, the outlook is for more settled weather from Friday onwards with higher pressure building up near Ireland, according to advance forecast specialists Irish Weather Online.
Prof Peter O'Donnell explained that the temperature will be generally cooler than the current unsettled period.
“Highs will be generally in the 5 to 8 degrees Celsius range.
“The settled period may be fairly persistent but one or two days could see high winds and heavy rain.”