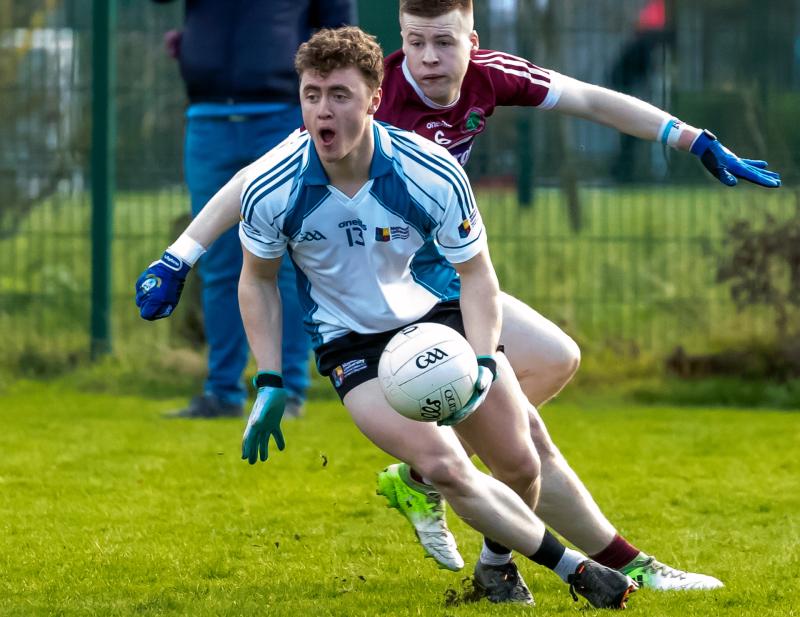 Maynooth University’s Sigerson Cup Campaign came to an end at the first time of asking after a well drilled and highly defensive St.Marys side claimed an eleven point victory on Sunday afternoon.

The game was a repeat of last years Quarter-Final where only two points separated the sides but there was never a worry about that as the Teaching College took control from the start and they picked off their opponents time and time again.

Conn Kilpatrick and Owen McCabe got the St.Marys goals with McCabe's effort particularly crucial as it arrived on the stroke of half-time.

St.Marys had numbers behind the ball for large periods of the game but Maynooth didn’t have the armoury in their ranks to work it out and the loss of captain Niall O'Donnell was keenly felt as St.Marys extra class up front won out.

It was a tight opening to the game with the sides deadlocked at 0-2 each after only ten minutes with the South Kildare pair of Mark Hyland and Padraig Fogarty knocking over points for Maynooth with Owen McCabe and Oisin O'Neill registering for St.Marys.

The Belfast College then went ahead when Tomas Carney knocked over back to back scores from play.

Darragh Warnock replied for Maynooth in the 18th minute but the rest of the half was dominated by St.Marys as they notched 1-4 without reply.

Points from Carney, O'Neill and Ruairi Rafferty made it 0-7 to 0-3 before Maynooth received a huge blow in first half stoppage time when a long ball in from Ryan Coleman resulted in Owen McCabe palming to the net as St.Marys took a seven point lead into the break.

The Ulster side continued to dominate at the start of the second half with Carney having a shot rebound off the post before Raffery pointed to extend the lead.

After Jack McCartan got a black card for an incident off the ball Maynooth got something of a renaissance going with Warnock and Jack Robinson x2 leaving five points between the teams.

There was no panic in the St.Marys ranks though and four points in a row between the 37th and 49th minutes settled the result essentially.

O'Neill, Cian McConville and Patrick Quigg were all on target and the icing on the cake then arrived in the 50th minute when Conn Kilpatrick broke clear to score the second St.Marys goal.

Maynooth did finish well with points from Robinson and Jimmy Hyland but their frustration was for all to see when Jason Gibbons got a red card late on.

St.Marys then concluded matters with a couple of points from Armagh's Oisin O'Neill as the visitors eased into the next round.