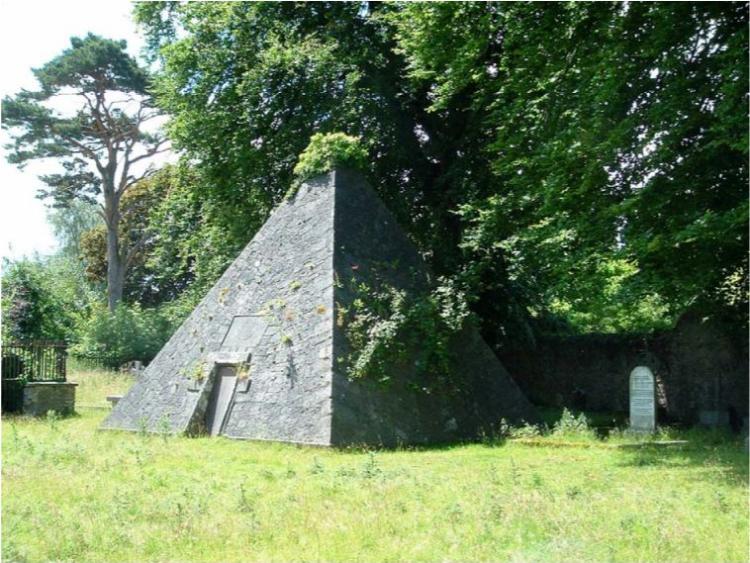 One of the pyramids in Maudlins Cemetery in Naas

A charitable trust is seeking information on two unique burial ‘pyramids’ in a Church of Ireland cemetery in Naas.
The Follies Trust, based in Co Armagh, said it intends to conserve the two ‘pyramid mausolea’ at Maudlins Cemetery which are associated with the De Burgh families.

According to the Trust, nowhere in Ireland or the UK are there two structures of this kind in such close proximity.
The Trust was established to conserve, preserve, restore and protect follies throughout the island of Ireland which are of particular beauty or historic, environmental, architectural or industrial significance.

The Trust added: “Before embarking on this project, the Trust is keen to know of and hear from any descendants or members of the families who erected these important mausolea who have not already been in touch with the Trust — both to inform them of the Trust’s proposals and equally important, to learn of whatever further information about the members of the families commemorated on the mausolea that the Trust may not be aware of or has been unable to glean from other sources. ”
People with information are are asked to write to: The Chairman, The Follies Trust, 146 Marlacoo Road, Portadown, Co Armagh. BT62 3TD.

By definition, a folly is a costly ornamental building with no practical purpose, especially a tower or mock-Gothic ruin built in a large garden or park.

According to information published by the Naas Local History Group, one pyramid was erected in memory of the wife of Walter Hussey Burg, grandson of the famous 18th century patriot and MP of the same name, whose seat was at Donore House, Caragh.

There are also vaults and enclosures containing the remains of many local titled families suchas the Earls of Mayo, the Earls of Clonmel, the De Burgs of Oldtown and the De Robecks of Gowran Grange.

One resident of the graveyard is the famous map maker Lieutenant Alexander Taylor who was buried there in 1828.

Meanwhile a lecture organised by the Follies Trust will be held in St David’s Church, Naas on Thursday, January 30 with a reception at 7.30pm and the lecture due to start at 8pm.

Expert Andrew Tierney will give a lecture on pyramids and follies in Central Leinster.