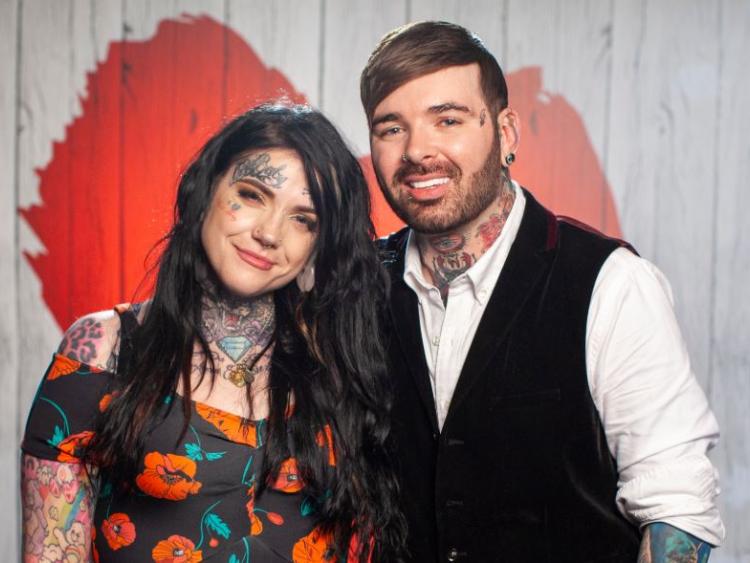 A Co Kildare woman, who survived breast cancer, appeared on the First Dates Ireland programme on RTE One where she spoke about her unusual face tattoos.

Leona, who did not give her surname, was diagnosed with stage 2 breast cancer three years ago when she was 29 and underwent a mastectomy of her breast.

And she told how the shock illness changed her life for the better, allowing her "to see what’s really important".

The woman was paired with another tattoo enthusiast -  Rob (30) from Limerick.

Leona said: “Cancer is one of the best things to happen to me in a weird way. It made me realise who my friends were.
“I used to be an insecure mess. Going through that and getting yourself together, like now I don’t care about things."
She added: “I got my face (tattoos) done after the whole thing. It put me back in track in my life way more than anything could have.”
She added: “I’m never going to say cancer was easy but it made me a better person and it made me realise who’s there for me.”
Leona underwent breast removal and she told how she’s in no rush to get reconstructive surgery.
She said: “The hardest thing was my auntie was dying of lung cancer that same week I had to tell my father.
“I had six months of chemotherapy. I had full breast removal. I don’t have a breast there (on right side).
"I had a full mastectomy. I’ve had talks about reconstruction but I’m going to wait.
“Before I had it removed, I was like ‘When is it getting back on’ but now I think there’s more important things in the world.”
Despite being happy in her own skin, Leona told how many people make false assumptions about her on account of her colourful markings.
She said: “I’ve been told by people I’m lucky I’m not their girlfriend because I wouldn’t be allowed look like that.
"I’m like: ‘Well I’m glad I’m not your girlfriends!’"
“It’s funny people make or break me for a few tattoos. People just judge me.”
Rob and Leona also discovered on the programme that they are both interested in taxidermy - the art of stuffing animals or birds.
It is revealed to viewers that they both own stuffed crows.
Man United fan Leona reveals she stuffed her crow - which she has named Eric Cantona - herself after studying taxidermy.
During their date, Rob surprises Leona by revealing he lost his virginity to a ghost.
Rob, whose dad worked on a cemetery, claims that he was visited by a sensual spirit as a teen.
Rob recalls that while living in an apartment in Limerick with his mother and two brothers that the energy levels went ‘crazy’.
He said: “I had a romantic connection with a ghost called Molly while living there and she was just very nurturing,”
“There was a warmth and energy which I could feel. I felt quite safe. It was three times it happened and was enjoyable.
"She was about six or seven years older than me at the time, so I would say she was in her early 20s.”

FIRST Dates airs on RTE2 on Thursday at 9.30pm.