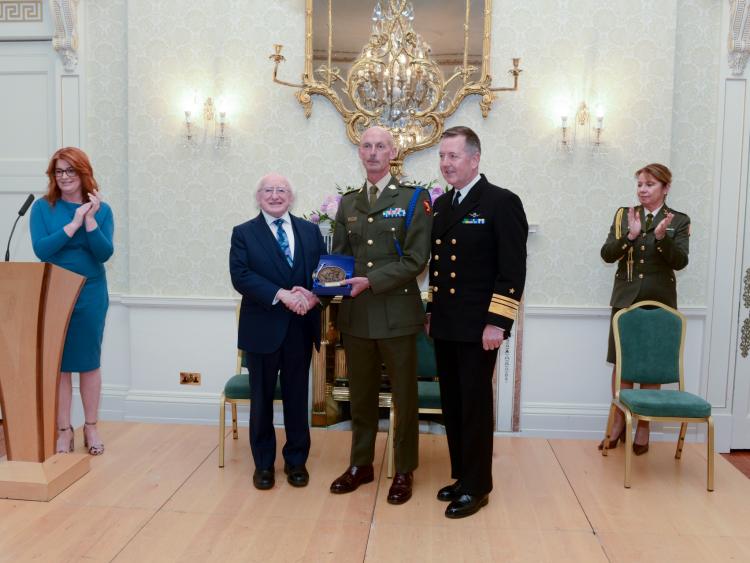 John was most recently employed in Defence Forces Training Centre as the senior manager of the communication Information Systems (CIS) group. His duties focussed on maintaining standards of service and training for all CIS Corps personnel. In the CIS Group there are three wings; The CIS School, CIS Workshop and CIS Operations wing. John’s own background is rooted in the area of Telecommunications, networks and Aerial Rigging. He managed the administration for 78 technical people of all ranks based in the Curragh Camp.

To date he has 40 years’ service and was deployed overseas on 16 occasions.

Recalling some of his many achievements over the years he said "I deployed in April 2017 to Syria with the 55th Infantry Group, UNDOF. As the RSM I was responsible for the running of the Military Base and the Operational tasking for the Group.

During this time we encountered spill over fire, this meant special bunker alerts and procedures were taught and practiced. The planning of patrols and long distance recovery convoys had a particular challenge."

Between 1998 and 2000 he also served on nine tours of duty in Lebanon. He was awarded NATO Meritorious Medal in 2015 for service in Kosovo.

Laura Considine and her mum Patricia

When can you expect to get the Covid-19 vaccine? This online tool calculates just that

Ages of victims in January ranged from 25 to 98

118 new Covid-19 cases in Kildare as CMO warns: "We must cut our social contacts"