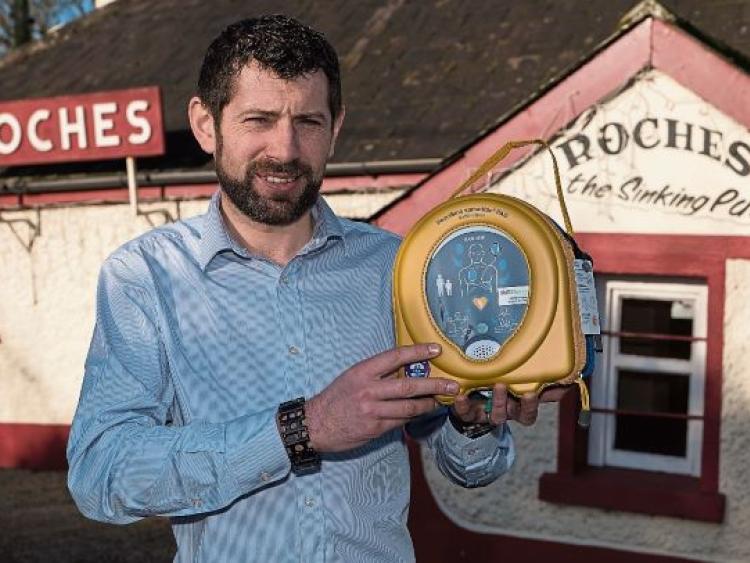 James Roche of Roche's of Donadea

Potentially life-saving defibrillators are being installed in two locations in the Donadea area thanks to local fundraising.
A raffle was held in Roche’s of Donadea pub over the Christmas period and a total of €1,738 was raised.
Some of this money was used to purchase a defibrillator which will be installed on the exterior side wall of the pub.
A portion of the proceeds was also used to acquire another defibrillator to be located at OCG Spares garage in Gilltown Lane, Donadea which is also helping to sponsor the cost.
James Roche of Roche’s pub thanked everybody for contributing to the raffle and he highlighted the importance of the life-saving equipment.
He said: “It was enormous generosity from customers in the pub and the proceeds will benefit the community in the long run.
“Both defibrillators will be available for public use when needed and they are a fantastic amenity.”
The fundraising campaign was also supported by Timahoe Community Council.
James added: “Thanks to everybody who bought a ticket.
“It’s an incredible amount to come from customers in a small pub in a rural part of Kildare.
“There is no contribution from the Council or the Government so this is simply locals empowering themselves and making it possible to have emergency life-saving equipment in their locality.”
James said he has also helped fundraise for defibrillators installed in other pubs he has worked in the Dublin area.
Meanwhile Hollywood star Jack Reynor paid a visit to Roche’s of Donadea on Saturday last.
Locals were surprised to see the award-winning actor who starred in the Hollywood blockbuster series, Transformers.
James Roche said on Facebook: “I had the pleasure of Mr Jack Reynor today.
“What a guy. Love your work Jack!”