Met Éireann warns snow is the feature of the weather forecast 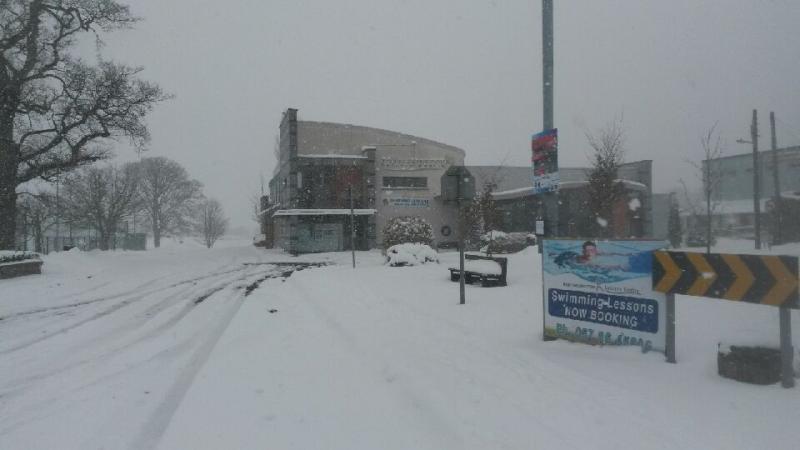 Snow in Portarlington during Storm Emma in 2018.

Met Éireann warns that snow is set to be a feature of the weather through Monday and Tuesday.

The forecaster warns snow showers may develop anywhere with some accumulations possible.

The forecaster also warns that the windy conditions that the country has experienced over the last few days caused by Storm Ciara will persist and coupled with the colder air it will feel bitterly cold, with the significant wind chill.

The Status Yellow - snow-ice warning for Ireland says there will be widespread wintry showers on Monday and Tuesday with some snowfall accumulations, especially in the west and north. It says some disruption to travel is possible, particularly over higher routes. The warning is valid until 23:59 Tuesday 11/02/2020

A Status Yellow wind warning for Ireland is also in place as the forecaster says Storm Ciara will continue to produce very strong west to southwest winds over Ireland with mean speeds of 50-65km/h and gusts generally of between 90 and 110km/h, higher in Atlantic coastal areas.

It says a combination of Spring Tides and high seas will result in a significant risk of coastal flooding.

The warning is valid until 8pm on Monday.

Met Éireann weather national forecast issued at 10.07 am on February 10.

TODAY - MONDAY 10TH FEBRUARY
Cold, very windy and wintry today. A band of sleet and snow will push eastwards across parts of the Midlands and southeast of the country this morning. Elsewhere, there will be frequent heavy, squally showers of rain, hail, sleet or snow. Some thundery downpours also. Strong to gale force westerly winds with severe and damaging gusts at times especially in exposed coastal regions of the west and north, and with very high seas the danger of coastal flooding continues, especially around high tides. Afternoon highs of 3 to 5 degrees, with wind-chill making it feel colder.

TONIGHT
Cold and very windy tonight with further showers of rain, hail, sleet and snow, with some snow accumulations in places especially across western and northern counties. Overnight minimums of 0 to +2 degrees, with frost and icy patches in spite of the strong wind.

TOMORROW - TUESDAY 11TH FEBRUARY
A frosty and icy start tomorrow morning with snow lying in places, particularly in the north and west. Cold and very windy again with sunny spells and further hail, sleet and snow showers. Afternoon highs of 2 to 4 degrees, in strong and squally westerly winds.

NATIONAL OUTLOOK
Headline: Very disturbed through the rest of this week. Cold and wintry conditions at first but milder later in the week but there will still be some very wet and windy periods.

Tuesday night: Cold on Tuesday night with wintry falls continuing in the southwest, west and northwest and some snow lying, drier in the midlands east and south with just well scattered wintry showers. Frost and icy conditions with overnight lows of around zero or -1 C.

Wednesday: A frosty start. Cold dry and bright in many places but still some sleet or snow showers in northern counties early in the day but for many dry until nightfall in lighter winds. Highs of 5 to 8 degrees Celsius. Turning wet and windy Wednesday evening and there could well be some falls of snow in northern counties for a time Wednesday night but clearing to cold showery conditions overnight, some wintry in northern parts. Overnight lows of 1 to 4 Celsius with frost in places.

Thursday: A cold bright day, blustery northwest winds in the morning with showers, some wintry, but turning drier and brighter in the afternoon with sunny spells and winds easing. Afternoon highs of 6 to 9 C.
Cold and frosty for a time Thursday night with sub-zero temperatures, but turning less cold later in the night in the west as cloud thickens and winds freshen.