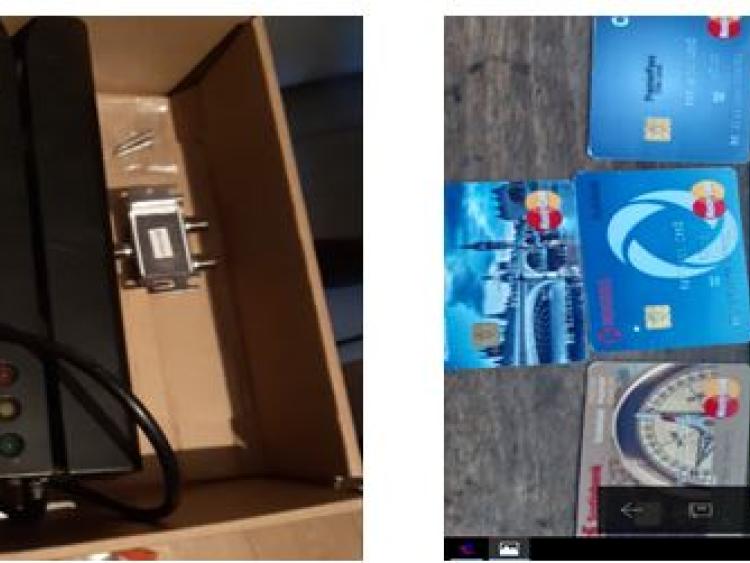 With information from police in the UK, and assistance from Europol, gardaí continue to clampdown on cloned credit card scams here in Ireland

Intelligence reports received by An Garda Síochána recently from colleagues in the UK indicated that a group were operating in Ireland.

Gardaí from Pearse St identified two males on Bedford Lane, Dublin 2 who they believed to be involved in this activity, one of these males attempted to conceal a wallet which contained seven (7) bank cards which have been identified as cloned fraudulent cards, a search of the second males wallet also contained five (5) fraudulent cards. Both men in their 30s were arrested and taken to Pearse St Garda Station.

In a follow up operation, a BMW SUV was searched thirteen (13) fraudulent credit cards were located along with expensive designer clothing and a number of receipts for other expensive goods believed to have been purchased using cloned credit cards in the Dublin City area.

A search of a flat in the city was also conducted and a number of documents were seized , subsequent searches were carried out in Tyrellstown, the Navan Road and Prussia Street which uncovered forty one (41) fraudulent bank cards along with re-encoding devices, a quantity of Cocaine (subject to analysis), a weighing scales and approximately €2,000 in cash.

Valuable assistance and advice was given by gardaí attached to the Garda National Economic Crime Bureau (GNECB)  in relation to this investigation and in total sixty six (66) fraudulent credit cards were seized.

This investigation will continue with assistance from our specialist Garda national units together with Europol and other European Police forces.

One man appeared before the Criminal Courts of Justice yesterday, Friday 14 February 2020 and was remanded in custody, a second man is expected to appear this morning, Saturday 15th February 2020.