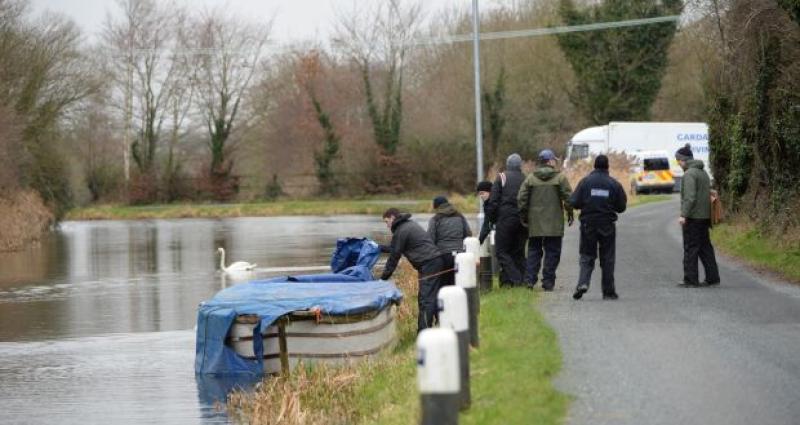 Gardaí recovered body parts from the Grand Canal near Sallins, which were later identified as those of Kenneth O'Brien

A man who disposed of the chainsaw used to dismember the body of Kenneth O'Brien has been jailed for 18 months for impeding the prosecution of his father, who carried out the murder and dumped the victim's body parts in the Grand Canal.

Paul Wells Junior (33), was found guilty last November of disposing of a blood-stained chainsaw used to dismember the body of Mr O’Brien, which his trial heard had a piece of "brown meat" embedded in its motor.

His father, Paul Wells Senior (51), of Barnamore Park, Finglas in Dublin 11 was jailed for life in 2018 having been found guilty of murdering Mr O'Brien at his home in Finglas on January 15 or 16, 2016. Wells Snr admitted that, after shooting the 33-year-old father in his back garden, he had dismembered his body and dumped it in a suitcase in the Grand Canal.

Wells Jnr, with an address at Beatty Park, Celbridge, Co Kildare, had denied disposing of the chainsaw motor at a time unknown between January 19 and 20, 2016 in Co Kildare. He had also pleaded not guilty to disposing of a chainsaw blade and chain on January 20, 2016 in the same location.

It was the prosecution's case that the defendant impeded the apprehension or prosecution of his father knowing that Wells Snr had taken a life.

At his sentence hearing last week, Wells Jnr’s barrister asked trial judge Ms Justice Carmel Stewart for a fully suspended sentence and said that a term of imprisonment should be the last resort.

Defence barrister Damien Colgan SC told the judge that his client was not involved in the murder of Mr O'Brien, had no previous convictions, was exposed to violence from an early age and greatly assisted gardai with the investigation.

The court also heard that Wells Jnr had a "difficult history" for the previous 15 years with his father and a credible threat had been placed upon his life by his father.

Wells Jnr was today (Monday) sentenced to three years in prison with the last 18 months suspended.

Ms Justice Stewart told the court that she had given "great consideration" to handing down a fully suspended sentence but said she did not think it would mark the gravity of the offence.

Wells Junior told gardai in his interviews that he did not know the STIHL chainsaw had been used to dismember Mr O'Brien's body and insisted he was just "putting the jigsaw together" when he threw the motor into the Royal Canal in Maynooth, Co Kildare.

He maintained throughout his interviews that he did not try to hinder the investigation and was afraid his father, who he described as a "glorified criminal", would shoot him.

The trial heard that Wells Snr was a "very violent" man, who in the past had tried to get the defendant to carry explosives and join the IRA. The killer also made threats from prison on the defendant's life and said if he did not put a bullet in his own son, "the IRA would".

Wells Jnr also confirmed to gardai in his interviews that his father drove him to the canal in Sallins on the night of January 16, 2016. The accused said he heard four splashes after the killer threw several bags into the water.

Furthermore, Wells Jnr told the authorities that his father informed him the body of a west Dublin man had been found on January 19, 2016. Gardai gave evidence in the trial that it was not publicly known where the deceased was from at this stage of the investigation.

The trial also heard that Wells Jnr went on his stag party to Latvia with his father, just days after Wells Snr had dismembered the victim's body. The accused also accepted over €11,000 in cash from his father but disputed it was payment to get rid of the chainsaw.