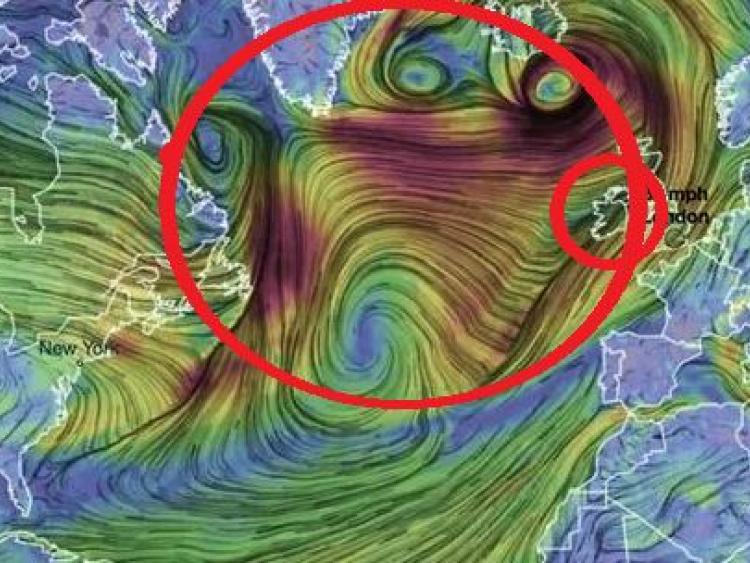 We've been battered by Storm Ciara and Storm Dennis on two weekends in a row now.

But the worrying news is that there could be another storm - Storm Ellen - on its way this weekend.

A weather chart issued by Ventusky (pictured) shows another powerful weather front hurtling from the Atlantic towards Ireland and the UK as we approach the weekend.

The weather front shown on the map is estimated to be travelling from the Atlantic at a speed of nearly 100 km per hour.

It could be closer to the weekend before the storm is officially named by Met Eireann and specific weather warnings are issued.

One thing's for certain, there will be more heavy rainfall in coming days with increased risk of flooding due to saturated land and already swollen rivers.

Irish Weather Online experts said of the weekend weather: "There are hints on various models of a stormy interval around Sunday night or possibly Monday, timing varies on different guidance but we may be tracking yet another storm around the end of the coming weekend."

The UK's Met Office long-range forecast reads: “Unsettled and often windy conditions are expected to continue with areas of rain moving east across the UK interspersed with brighter, showery interludes.

“Rain is likely to be heaviest across western and especially northwestern areas with the driest and brightest weather across the east and southeast.

“Hail and thunder are also possible in the showery interludes with snow at times over northern hills."

At the weekend, Storm Ciara brought gusts of up to 120km/h on the west coast.

An 80-metre 'ghost ship', which had been abandoned and adrift in the Atlantic for more than a year, was blown onto rocks near Ballycotton in east Cork.

Elsewhere, Storm Dennis lashed parts of the UK with more than a month's worth of rain in 48 hours and winds of more than 140km/h.

One of the worst-hit areas in South Wales was the village of Nantgarw, Rhondda Cynon Taff, near Cardiff, which had seen entire streets left underwater.