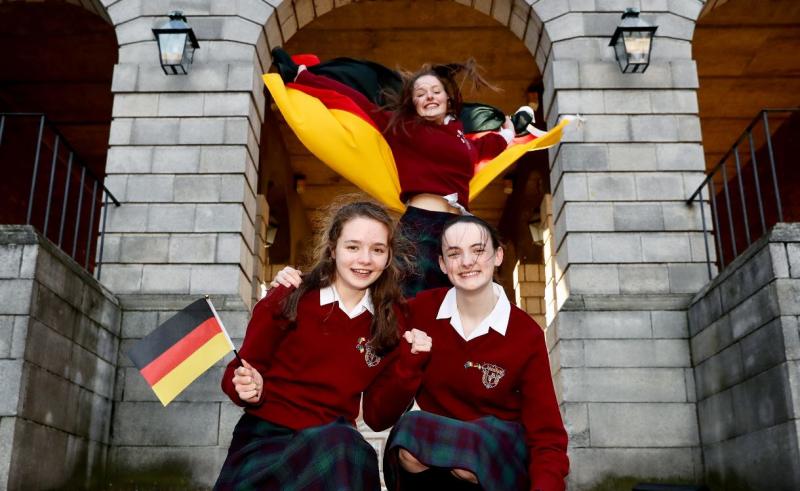 St Mary's College from Naas, who were representing Germany, have won the 2020 Model Council of the European Union.

Students Niamh, Fiona and Lucy were taught by Ms Morrissey and Mr Duffy. 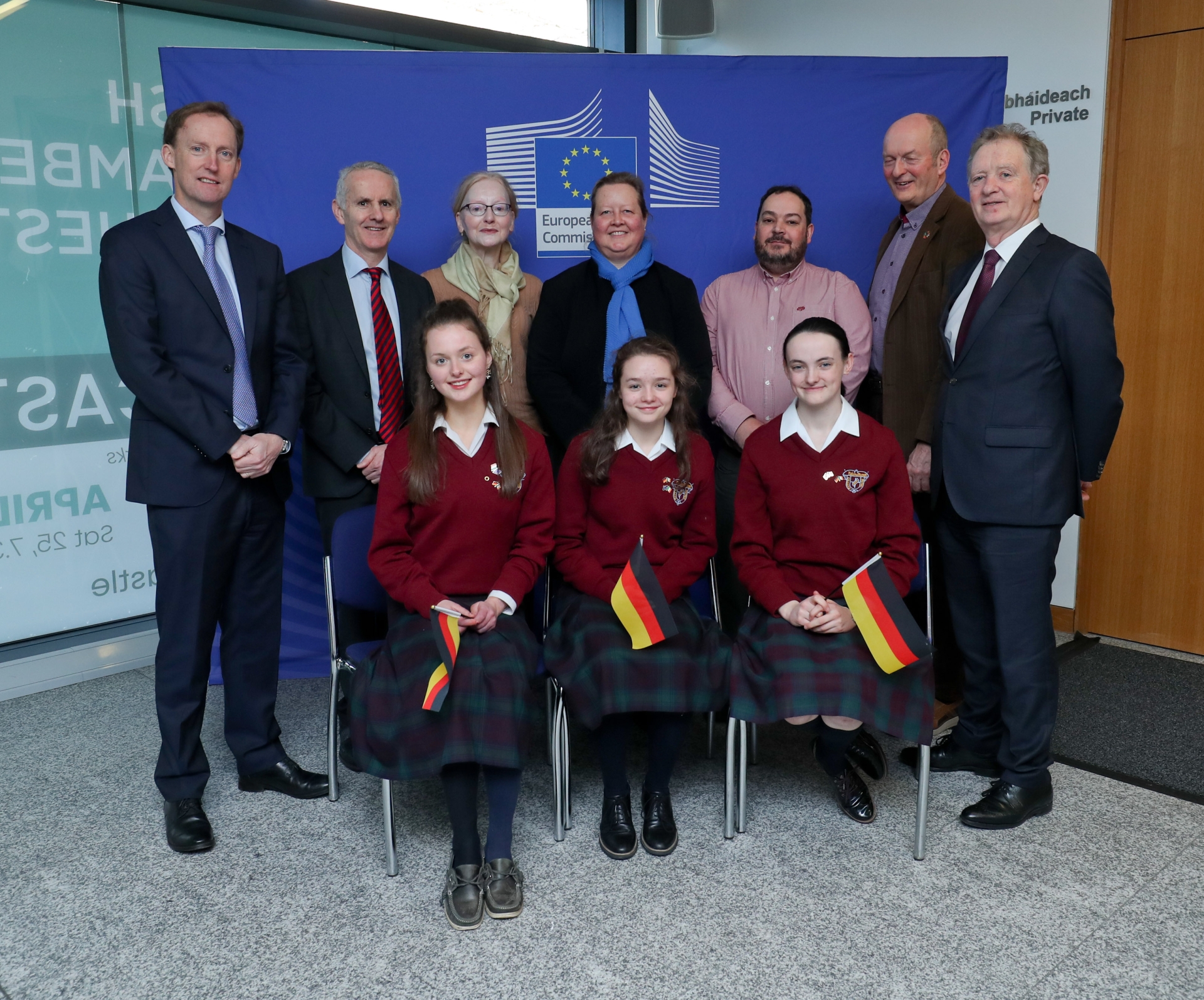 Over 80 secondary pupils from schools across Ireland gathered at the Printworks Building at Dublin Castle on Thursday to participate in the Model Council of the European Union debate on the European Green Deal.

The Green Deal is the EU’s response to the existential challenge posed by the climate crisis: a comprehensive package of structural reforms and new policy initiatives designed to make the EU the world’s first “climate-neutral continent” by 2050.

Minister for Communications, Climate Action and Environment, Richard Bruton TD opened the event noting that: “Climate represents an existential threat to the future of civilisation. Young people have rightly pointed the finger at our generation for failing to act. There is now a real opportunity for Europe to show leadership, not only for our own citizens, but for the world. The changes needed challenge our lifestyles at a fundamental level. The format of this debate is really exciting because it puts people in the shoes of different governments struggling with their own unique circumstances to bring people with them in responding to this major challenge.”

Gerry Kiely, Head of the European Commission Representation in Ireland said: “We are proud to host this discussion on climate policy, providing young people from across country with an opportunity to engage with the defining political issue of our era. Protecting the environment and increasing biodiversity is a major priority for the European Commission, particularly in the context of President Ursula von der Leyen’s Green Deal.”

Chair of the Debate, Barry Andrews, MEP for Dublin, commented: “I’m extremely impressed by the effort made by all students and teachers to research and prepare the position of the country they were representing. During the passionate debate, the students discussed how to solve the climate crisis by becoming more conscious of the environment in areas ranging from transport to taxation, from food to farming, and from industry to infrastructure.”

The event was adjudicated upon by an expert judging panel including: Noelle O’Connell, Executive Director of the European Movement Ireland; Mary McCaughey, Head of Information and Communication, European Foundation for the Improvement of Living and Working Conditions; and Michael Ewing, Development Officer, Irish Environmental Network & Environmental Pillar.

Announcing the winners EMI Executive Director, Noelle O’Connell stated: “It was a pleasure once again to be on the judging panel for this inspiring initiative by the European Commission Representation in Ireland. With Greta Thunberg inspiring youth activism around climate change action with Fridays for Future, it is very timely that the 2020 Model Council of the European Union should debate the European Green Deal. By facilitating students in Ireland to debate the Green Deal, the Model Council empowers these students to be engaged in an informed and engaged manner on environmental issues and the EU.”

Ciaran Cuffe, MEP for Dublin, congratulated the winning schools, awarding the winners a trip to Strasbourg to attend the European Parliament’s Euroscola debate. "Euroscola is such an important programme in engaging young people to find out more about the work of the European Parliament. We can feel very detached from the decision-making processes that take place in our European Institutions, decisions that can have a real impact on our lives here in Ireland. At a time when Brexit and other factors can make it seem like the future of the European project is under threat, it is very reassuring as an MEP to know that there are so many talented young people taking an interest in the EU and its structures. I look forward to welcoming today's prize winners to Strasbourg later this year."

The Model Council of the European Union was streamed live on the European Commission Representation in Ireland’s website and social media channels. Oireachtas TV intend to broadcast footage of the event in early March.

Background to the Debate

The Model Council is an annual debate for secondary school students organised by the European Commission Representation in Ireland every year since 2007. The debate is a simulation of a meeting of the Council of the European Union and involves teams from secondary schools around Ireland, each of which represents one of the EU’s 27 Member States.

Before the debate, the students and their teachers research the issues for the country they are role-playing. The Ambassadors from each EU country come to Dublin Castle on the day to meet the students representing their home country.

The subject of this year’s debate was Climate Change and the European Green Deal. Students were asked to debate the Effort Sharing Regulation on Greenhouse Gas Emissions, part of a set of policies and measures on climate change and energy that will help move Europe towards a low-carbon economy and increase its energy security.

The following schools participated in the 2020 Model Council: