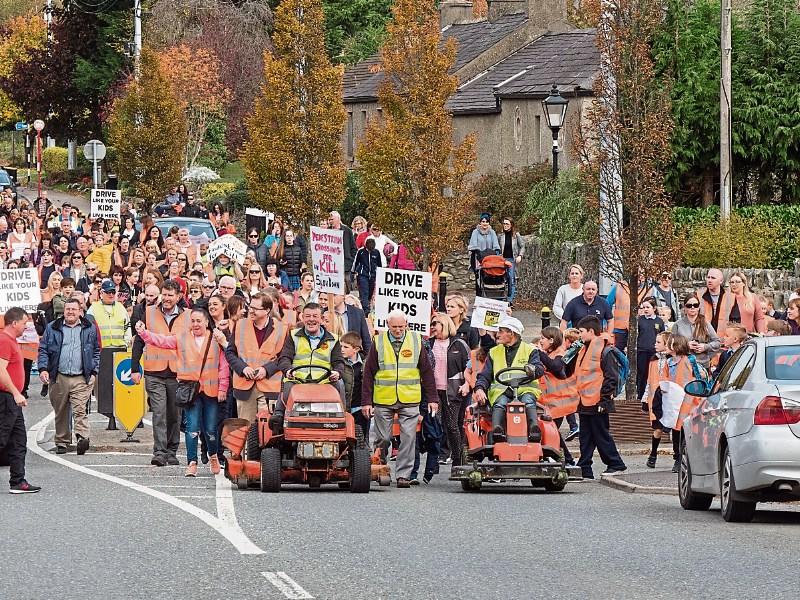 Crowds protesting in Kill back in 2018 over the lack of a pedestrian crossing. Picture: Tony Keane

Kildare County Council says a pedestrian crossing won’t be approved for Kill before a traffic count is undertaken to establish the amount of traffic passing through.

KCC is resisting pressure to construct a pedestrian crossing in the village.

A campaign for a crossing surfaced in the wake of an accident involving a young girl, who received minor injuries, crossing the main street in October 2018. A temporary crossing was provided by KCC but was removed last summer.

According to the council the crossing was a “temporary measure” during the construction of the M7 widening project creating three lanes on either side.

This issue has led to protests by parents, who walked through the village from the Scoil Bhríde primary school 17 months ago.

KCC's director of transport Tadhg McDonnell said a decision on a crossing must await a traffic survey which is set to take place next month.

He conceded that there are times when a lot of vehicles go through Kill and Johnstown but the council needs to establish what is happening 85% of the time.

“There is pressure for a crossing. I don’t want to be unfair to Kill but there are other villages as well including Sallins (and) there are competing priorities.”

Cllr Fintan Brett acknowledged that the Naas to Kill cycle scheme will create three crossings, at the school, in the village centre and near Embassy Manor — but work hasn’t started on this and “when something happens on the motorway traffic comes through Kill, any hiccup on the read means traffic coming through.”

“I don’t know how Kill doesn’t have a crossing, it doesn’t sit right,” said Cllr Evie Sammon. She said a crossing in Ballymore operates at 8.50am and 2.50pm at the school.

Cllr Bill Clear pointed out that most of the residential areas are on one side of Kill and the retail businesses are on the other. He said 1,000 children attend the school and the amount of traffic going through daily equates to 10,000-15,000 vehicles.

Kill resident Diana Maynard, who’s involved with the campaign for a crossing says a temporary one should be considered.

She added: “ I'm so angry right now. As a parent I got involved to get a safe crossing for our village. I have four children and elderly relatives that need a safe place to cross. The council will have blood on their hands if, God forbid, an accident happens because the village is getting busier.”