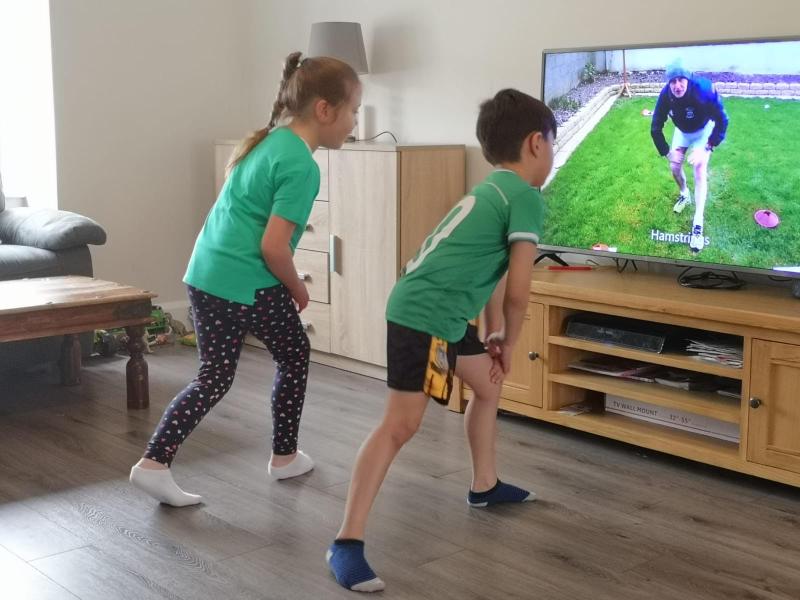 Two members doing their training in the sitting room

A local GAA club got a shout out on Twitter from the Minsiter for Health Simon Harris for playing their part to help keep kids active during the virus outbreak.

Earlier this week, Round Towers hurling coaches Gda Paul Condon, Robert Healy and Brendan (Domo) Domican decided to put together a remote circuit training session for all teams to use as a way to keep  up to date with your fitness during the Covid-19 Pandemic.

A total of five separate videos were shot on the evening and have since been released onto the Round Tower Facebook page and You Tube to help kids keep up their hurling training.

Since their release, a lot of images have been shared online of children taking part in these videos from home due to the Coronavirus restrictions in place.

On Wednesday night, Brendan's daughter Kym Kelly decided to acknowledge the idea on Twitter and tweeted some images of the children taking part to Minister Simon Harris.

Shortly after this, Minister Harris tweeted his message of encouragement and thanks to Brendan and Round Towers for this kind initiative stating "that sadly hurling skills are lacking and that he had better stick to politics".

"Since Wednesday night, twitter has been in full sharing mode of not only the tweets but the actual videos which is absolutely fantastic," said Kym.

"What the world needs now is goodwill and a little exercise and this is widely acknowledged judging by the hundreds of likes, retweets and shares on these videos."