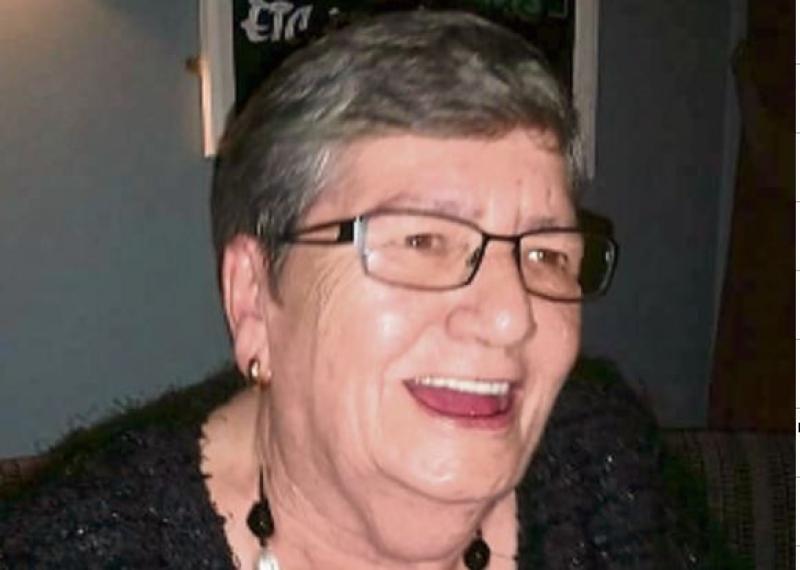 The late Theresa 'Tete' Murray who will be fondly remembered by many in Naas where she worked in a shop on Main Street, and ran a grocery shop on Basin Street, RIP

On Wednesday, February 26, Theresa (Tete) Murray, nee Nugent, was laid to rest in one of the most picturesque cemeteries in the world, at Omey Island, Claddaghduff, Co Galway.

A native of Two Mile House, the late Theresa worked for a time at Higgin’s shop opposite the Town Hall on Main Street, Naas.  She then leased a premises on Basin Street where she set up her own grocery store which she ran for several years.

In the mid ‘60s, Theresa headed for England where she met John Joe Murray of Inishshark, Co Galway. The pair married and returned to Ireland where they set up home in Clifden, and later at Grallagh, Claddaghduff, raising five children, Johnny, Michael, Rose, Mirella and Edwina.

Theresa worked at the telephone exchange in Clifden, at a time when all phone calls to the area were put through manually by an operator.

Known in Naas for her lively sense of humour and her fondness for pranking friends, her zest for life and fun didn’t desert her in later life. Always good company, she hosted weekly gatherings at her home in Claddaghduff which her friends never missed. Her generosity and concern for others were also evident throughout her life and visitors to her home were always sure of a warm welcome.

She found time every evening for prayer and was a regular attender at mass in the little seaside church where her funeral services were held. Predeceased by her husband John Joe, Theresa passed away peacefully after a short illness on Saturday, February 22, at Galway Regional Hospital, surrounded by her family.

Music had always been a huge part of family life and Theresa and John Joe instilled in their children a love of traditional music and dancing. Her daughter Mirella performs around the world with Cherish the Ladies, and played at the offertory, a waltz called 'The Diamond'.

Her granddaughter Tara sang beautifully during the mass. Grandson Johnny (Buster) did one of the readings, granddaughter Blaithín led the Prayers of the Faithful and granddaughters Sophie and Roisín brought the gifts to the altar.

The huge crowds attending the Tuesday evening service and Wednesday morning funeral mass were a testament to her popularity in the area.

The funeral cortege made its way from the Star of the Sea Church at Claddaghduff across Omey beach to the graveyard on the island where her coffin was lowered. Family members dropped red roses onto the coffin before, in time honoured tradition, local men took up shovels and completed the burial.

May her gentle soul rest in eternal peace – the late and much loved Theresa 'Tete' Murray, amen.