Continue to adhere to the Covid-19 lockdown restrictions 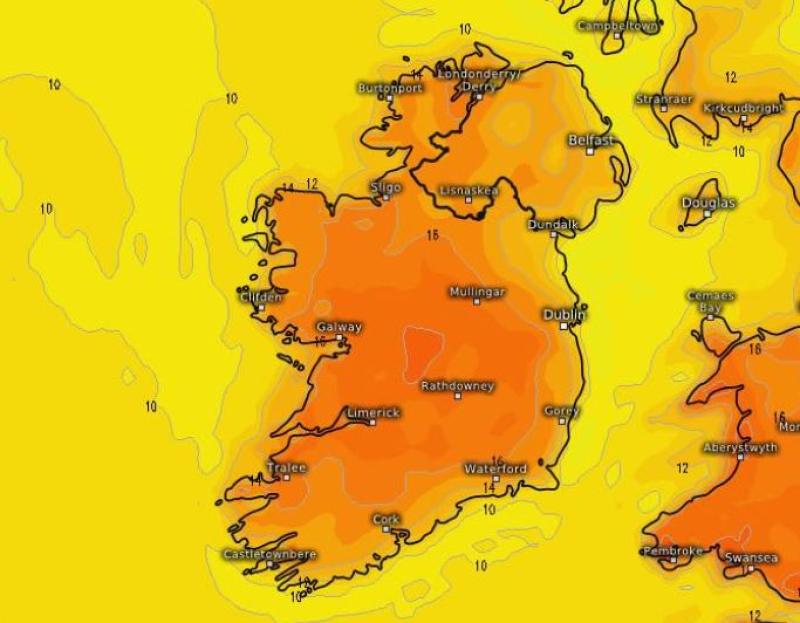 Not a drop of rain in sight for most of Ireland (CREDIT: Carlow Weather)

Temperatures could soar to 18C in parts of Ireland this Wednesday with "lots of sunshine", says forecaster, Alan O'Reilly.

According to www.carlowweather.com, there will be a light breeze and it will be cloudy in the West and North with temperatures held back at around 15C.

Alan added that after some great days already this week, Wednesday "will be another lovely day and even warmer".

Met Eireann said Thursday will be a warm and mainly dry day with a mix of cloud and hazy sunshine.

Met Eireann issued the following forecast for later in the week:

Friday: Friday will be a mild and often cloudy day with scattered outbreaks of rain and drizzle, but some drier and brighter interludes will occur at times too. Top temperatures will range 13 to 17 degrees, but a little cooler near southern and western coasts, where mist and fog and patches may linger in light southeast or variable breezes. Mostly cloudy on Friday night with further outbreaks of rain and drizzle. Lows of 8 to 11 degrees with light southerly breezes veering southwest to west.

Saturday: Mostly cloudy to begin on Saturday with rain or showers, but clearer, drier and brighter intervals will spread from the west for a time. Further cloud and showery rain will, however, extend from the Atlantic again through the late afternoon and evening. Highs of 11 to 15 degrees in light to moderate west to northwest breezes, backing southwest to south later. A mix of cloud and clear intervals for Saturday night, with showers or longer spells of rain. Lows of 5 to 8 degrees in light to moderate south to southwest breezes.

Sunday: Often cloudy with showers or longer spells of rain, possibly heavy at times, but occasional drier and brighter intervals too. Cooler than recent days with maximum temperatures closer to average at 11 to 13 degrees. Light variable breezes becoming light to moderate northeasterly later.

Monday: Current indications are for high pressure to build from the north, with mainly fine and cool conditions extending southwards over the country during Monday. Rather cool in the east and north with maxima of 9 to 12 degrees, milder in the west and southwest with daytime highs of 13 to 15 degrees. Moderate to fresh and gusty east to northeast winds, will decrease light to moderate later.

Further outlook to midweek: Dry and settled on Tuesday, but turning more unsettled with spells of rain or showers again around midweek.