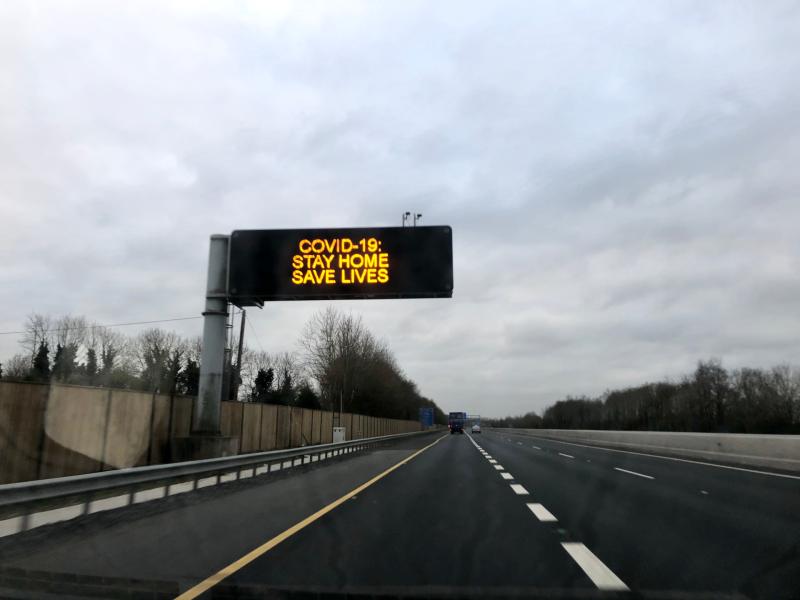 The Covid-19 restrictions on travel have reduced Kildare’s main motorways to just a trickle of traffic due to the lack of commuters.
Traffic volumes have remained at a sustained lower level since the ‘Stay at Home’ notice was delivered by the Taoiseach on March 27.
An analysis of statistics provided by Transport Infrastructure Ireland (TII) show that volumes are down to about one-third of their normal levels due to the reduced numbers of vehicles.

Whittled down
For example, on the N7 at Kill there were over 93,000 vehicles recorded on Wednesday, March 4. However this was whittled down on under 30,000 on Wednesday last, April 1.
Further along the M7 near Kildare Village, traffic dropped from 41,619 to 13,167 between early March and last Wednesday.
The highest number of vehicles per hour usually reaches 3,600 but this barely breached 1,000 last week.
Similarly for the M4, traffic near the Maynooth junction rose to over 47,000 in early March — but this was reduced to just over 15,000 on Wednesday last.

TII spokesman Sean O’Neill told the Leader: “On all motorways and routes, we’re down to traffic levels lower than a very quiet Christmas Day or New Year’s Day but this is every day.

“It’s probably the longest period of time where traffic has been this low, but of course it’s very welcome as it proves that people are observing the Covid-19 restrictions apart from essential workers who are allowed to travel.”

Traffic counters installed on motorways provide information on the volume of traffic by hour of day and the type of vehicle.
Vehicles are detected by passing over loops embedded in the road surface.

Google statistics
Meanwhile the impact of the Covid-19 restrictions on the movement in people across County Kildare has been laid bare in new data published by Google.
The tech giant has gathered information from users of its technology, to examine how travel patterns have altered across the country in recent weeks.
Traffic at retail and recreation sites have plummeted by 84% but grocery and pharmacy locations have seen a smaller drop of 36% as the majority are still open but visited less often.
Workplaces have dropped by 51% reflecting the rules on essential-only employment while numbers in homes has increased by 21%.

Widening
Key elements of the overall project by SIAC/Colas include the widening the existing M7 motorway from two lanes to three lanes both eastbound and westbound for approximately 14km.
The upgrade concerns the stretch of motorway between Junction 9 Naas North, at Maudlins (Perpetual Motion Ball), and the M7/M9 interchange, at Junction 11.