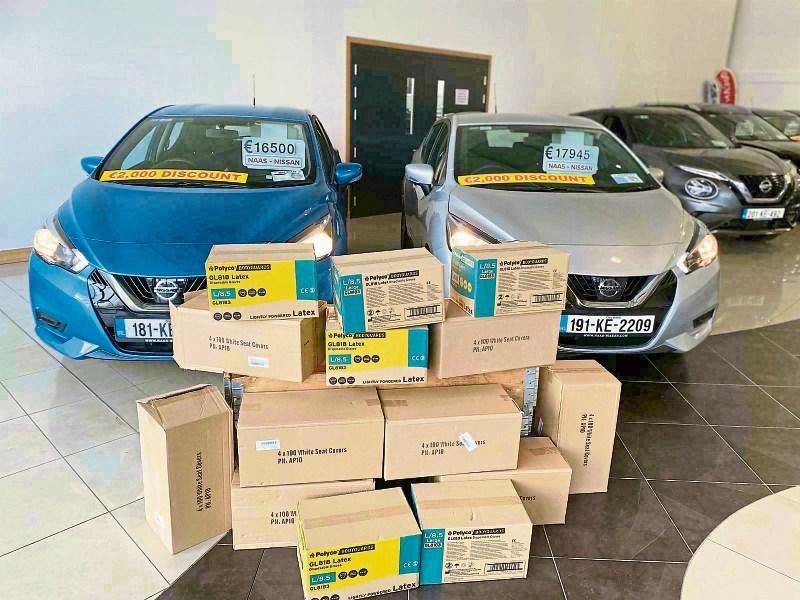 PPE equipment at Naas Nissan, prior to delivery

A Naas businessman has lent a helping hand to the medical effort against the Covid-19 spread by funding protective equipment.

There has been much talk about the importance of personal protective equipment (PPE) here and in the UK and fears have been expressed that not enough is available given the demands placed on medical staff, especially in hospitals, because of the virus spread.

The Naas Nissan car dealership and garage, based at Newhall, provided an initial 5,000 protective gloves and 2,000 car seats covers. These orders were then beefed up significantly to the point where the garage has funded the provision of a total of 25,000 gloves and 3,500 car seat covers.

“It was apparent that there was a need for the gloves and also the car seat covers so I put in an initial order for 5,000 gloves along with 2,000 car seat covers.

“I know that some people in the hospital were concerned about supplies and whether new ones would arrive in time,” said Jack O’Donoghue of Naas Nissan.

Mr O’Donoghue saw that there was a shortage of these items.

“I knew we could source them relatively quickly and I asked for a reasonable price because we are donating them.”

He said the car seat covers offer protection against the coronavirus moving into a vehicle.

The company undertook the initiative along with community gardai based at the station Naas.

“The gloves will predominantly go to the hospital and some will go to the gardai for use in cars which are bringing people to hospital, like patients needing dialysis.”

He also said his company will put in special screens between the front and back seats to reduce the risk of virus spread.

“The gloves will have other uses like in nursing homes or clinics, I’ll leave that up the gardai to decide. Everyone is trying to help,” he added.