LATEST: Kildare Gardaí out in force today to ensure Covid-19 travel restrictions are being followed 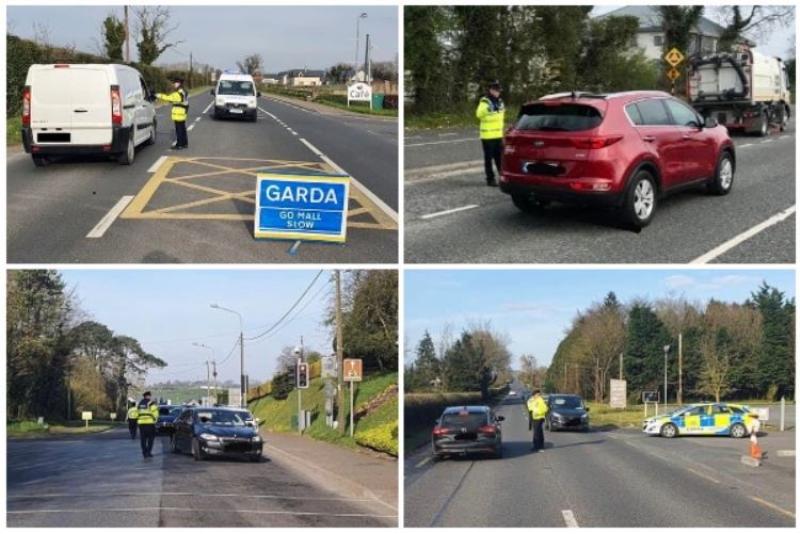 Garda checkpoints in operation around Kildare

Gardaí have stepped up the number of checkpoints across Co Kidare today as part of a major operation to ensure public compliance with the travel restrictions introduced recently as part of Covid-19 public health guidelines.

Gardaí are checking where motorists are travelling to and if their journeys are essential.

Many motorists have reported being stopped multiple time in the past 24 hours.

All villages and towns are seeing checkpoints as well as entry and exit routes to the M7 and M4 motorways.

Families have been persistently warned not to travel to holiday homes as they risk spreading the Covid-19 virus.

The overall Garda operation – Operation Fanacht – will see an extensive network of checkpoints established across the country.

The Operation will run from until Easter Monday night, April 13.

Nationally, it will involve thousands of checkpoints every day. At any one time, there will be over 2,500 Gardaí involved in checkpoints or high visibility patrolling.

Gardaí were given new powers to restrict people's movements and gatherings for the weekend under emergency health legislation brought in last month.

Penalties for non-compliance include fines of up to €2,500 and up to six months in prison.

The Garda Commissioner Drew Harris also appealed to members of the public to make gardaí aware of any potential breach of restrictions introduced to combat the Covid-19 crisis.

He said: "If people see something that is of concern to them, which they think is something where there is a risk of the illness being spread on, a further vector for the illness, then they should let us know so that we can act, arrive there, deal with the situation and hopefully then resolve it."

Last month, Taoiseach Leo Varadkar introduced strict measures to help stop the spread of Covid-19 and they remain in place until midnight on Sunday, but are expected to be extended.

John Caulfield, Interim CEO, Road Safety Authority (RSA) said, "While the roads will have less traffic than normal over the Easter Bank Holiday Weekend it doesn’t mean that there is no danger on the roads. People will be out exercising by going for a walk or cycle. So, I’m asking drivers to watch out for vulnerable road users and to slow down.

"Never has it been more important to practice good road safety habits because every crash and injury we prevent means we are putting less pressure on our first responders and health professions at a time of national crisis.”