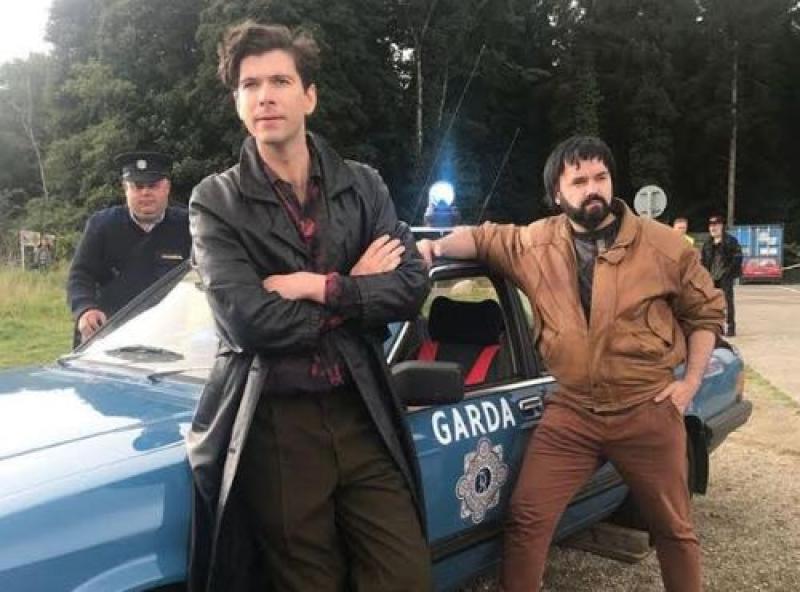 A scene from the film

This Friday, an Irish film made in Co Kildare capturing the big hair and music of the 1980s will make a most unusual premier – on Facebook!

To screen at 7pm on Friday, May 1, ‘Danny Boy’ was written and directed by Ferdia Mac Anna who secured the talents of Clelia Murphy (well-known actress from Fair City) and actor/comedian Paddy C Courtney, both of whom signed up for the low budget film – without even reading the script!

Once the two actors heard it was the work of Mac Anna, Murphy told Ireland Am this week there was no question but that she was going to sign up for the project.

Alas, with plans to launch Danny Boy this year, the onset of Covid-19 totally threw any plans to premiere out the window.

Murphy, who plays the central character Danny’s mother (played by Darragh Byrne), described her role as being “a very quirky mammy” who is running for local elections against the smarmy character played by comic Paddy C Courtney. She further noted MacAnna, as he always does, offers key roles to up and coming actors, and has often given the launch pad to many a young actress/actor.

In promoting Friday’s premiere, Mac Anna said “It's up to all of us to slow the spread of COVID-19. Everyone, including young and healthy people, should avoid large gatherings during this time” and hence, he decided to do the premiere online, on Facebook this Friday.

Murphy who recently played the Baroness in the Sound of Music at the Bord Gais Energy Theatre and also wowed TV audiences last year on RTE’s ‘Dancing with the Stars’ encourages Kildare audiences to get dressed up in 80s gear and enjoy the rom-com which focuses on a fatherless teenager, Danny, trying to curtail his enigmatic mother, hold his family together and find love while coping with a stutter!

Made by Frame It Productions which is based in Sallins, Co Kildare, the script was written by Ferdia Mac Anna and Mary Duffin and produced by Richard Kearney and MacAnna with Collette Hempenstall as Production Manager. Parts of the film were shot on location in Naas and Sallins, and at Russelstown near Russburough, Co Wicklow. Auditions for extras were carried out in the Bridgewater Inn, Sallins with Naas Town Hotel the base for crew during filming.

Along with a fab soundtrack from the 80’s, with big hair and of course, ripped jeans, denims, goths and head bands, get the popcorn ordered, dig out your leg warmers and daft neon colours and get set for an hilarious adventure on Friday next!

In the safety of your own home, enjoy this rollicking rom-com; screening from 7-9pm on Danny Boy on Facebook. Check out the FB page too for ongoing clips and competitions in the lead up to Friday night’s premiere.