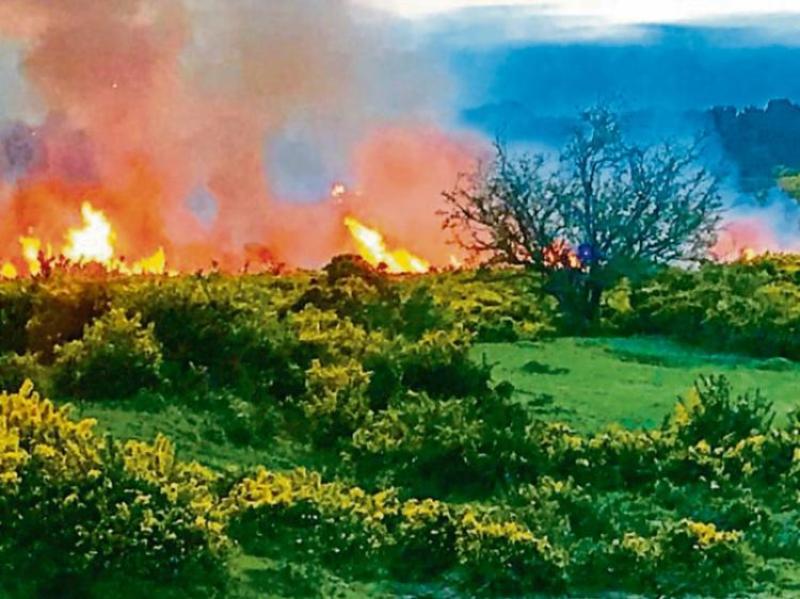 File photo of a gorse fire in the Curragh

An Orange Fire Warning issued for Co Kildare and nationwide by the Department of Agriculture is in place until Monday.

Members of the public are warned not to light camp fires or BBQs in open spaces near dried vegetation.

Kildare Fire Service has also warned of the dangers of forest and gorse fires due to several weeks of dry weather.

A Orange Fire Warning is the second highest level which can be issued by the Department of Agriculture.

After record rainfall in February, the unseasonably dry and sunny weather in March, April and early May recent has led to dehydrated vegetation — such as across the Curragh.

All countryside users are asked to be vigilant, to report any suspicious activity to An Garda Siochána and to report any uncontrolled or unattended fires immediately to the Fire and Emergency Services via 112/999 service.

Coillte has also urged the public to be vigilant in relation to forest fires and added that most forest fires do not start naturally and everybody has an important role to play in preventing them.

Simple acts such as lighting a campfire or having a barbecue can have potentially catastrophic effects.

Hundreds of acres of forest are damaged by fire ever year.

It is illegal for landowners to burn vegetation on uncultivated land between March and the end of August.

People should not discard cigarette ends should make sure they are extinguished.

Anybody acting irresponsibly or carelessly with fire should be reported to the authorities.