Protest at the Debenhams store in Whitewater Shopping Centre 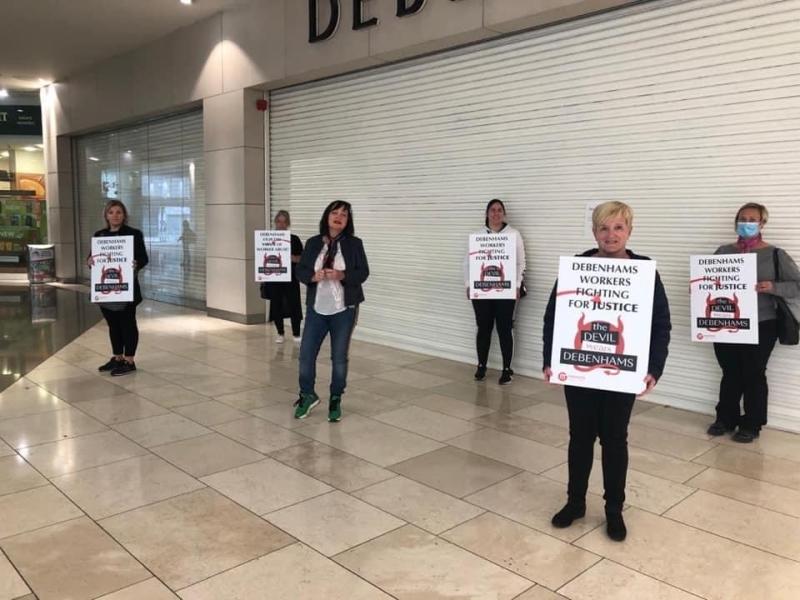 The demonstration was attended by Senator Fiona O'Loughlin

The Mandate Trade Union today hosted 11 demonstrations outside all Debenhams stores across Ireland  - including at the outlet in Whitewater Shopping Centre in Newbridge.

The union said the protests aimed to highlight the injustice faced by more than 1,000 workers who have been told their jobs are gone and that the company does not have sufficient assets to fund their agreed redundancy package.

Debenhams workers in Ireland lost their jobs on the 9th April after management informed staff by email that their stores in Ireland “are not expected to reopen” and the company was filing for liquidation.

The workers are calling for the parent company, which is still trading online in Ireland and across the UK, to pay the collectively agreed union negotiated redundancy package to all Debenhams workers.

“What has happened to these Debenhams workers is an absolute disgrace. Some of these workers have more than 40 years of service and have literally been discarded by their employer as if they meant nothing to the company. These workers, like all workers, deserve respect, dignity and to have their collective agreement with the company adhered to.”
Mr Douglas explained that the workers are currently balloting for industrial action.

“Debenhams Ireland acted cynically and opportunistically when they decided to liquidate the company during a public holiday weekend in the middle of a pandemic. Debenhams knew full well it would be difficult for their employees to resist and organise themselves effectively. However, those brave workers have done a tremendous job in making the public aware of their struggle for justice which has garnered incredible national and international support.”

He added, “We are currently balloting for industrial action and should our members decide to pursue that approach, Mandate will ensure that those 11 Debenhams locations do not go back to ‘business as normal’ when this pandemic ends. Subsequently, any  locations which reopen for business will be subject to picketed protests, whether they are operated by Debenhams or another company.”

Mr Douglas has also called on the Minister for Employment Affairs and Social Protection, Regina Doherty, to intervene in the liquidation process in an effort to save jobs if possible.

He added: “Given that the State’s insolvency fund will be utilized by the liquidation of Debenhams, costing the Irish taxpayer millions in statutory redundancy payments for 1,000 workers, we have asked the Minister to use Ministerial powers under Section 15, of The Protection of Employment Act 1977 which provides that ‘For the purpose of seeking solutions to the problems caused by the proposed redundancies the employer concerned, shall, at the Minister’s request, enter into consultations with[her] or an authorised officer’.”