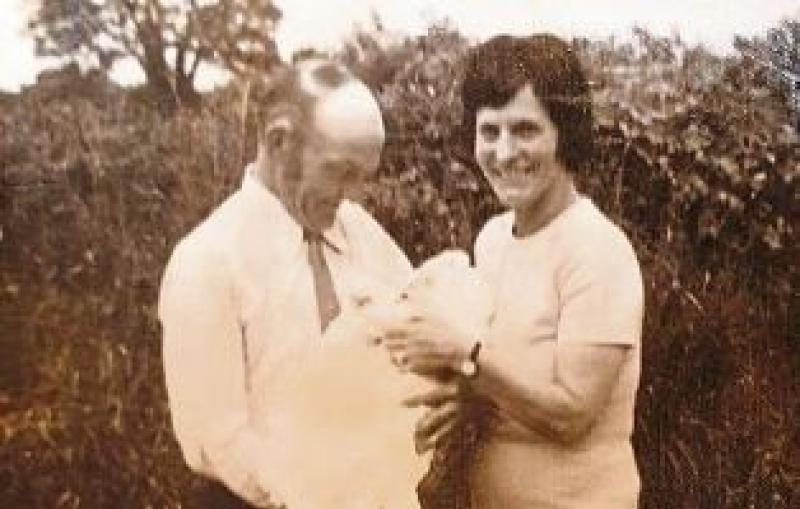 Baby Helen Downey and her grandparents Mick and Elizabeth Downey.

A request went out for old pictures on the ‘Together Kildare Will be Better’ Facebook page started by Cllr Suzanne Doyle, Bernadette Prendergast, Emily O’Conor, Aoife O’Fearghaíl and Martina McGovern - as part of the town’s Covid-19 support team.
Joe Connelly and the Kildare Historical Society were also valuable contributors.

A spokesperson said: “We all came together at the beginning of the crisis to reach out to people in the town and let them know that they were not on their own.
“The Facebook page is one of a number of initiatives running under the ‘Together Kildare will be Better’ banner.” 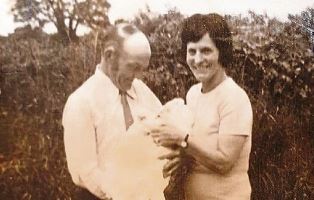 ABOVE: Baby Helen Downey and her grandparents Mick and Elizabeth Downey. Helen's mother Valerie Downey recalled: “I moved to Cherry Avenue in the Irish National Stud in 1972 into a cottage with John’s mam and dad, Elizabeth and Mick Downey. Mick was a stud hand in Cherry Avenue yard and John was working in John Oxx’s yard. Kildare was a lovely quiet town then, very little traffic, no traffic lights, no pedestrian crossings and we knew everyone that we met on the road. Mrs Downey, John’s Mum, or Grandma as I always called her and myself with Helen in her pram did the weekly grocery shopping every Friday afternoon. First stop was Top Nolan’s to order the fuel for the week, coal, and briquettes. One half of the shop was a hardware store and the other half a bar. John’s mum didn’t like going in there because of the bar so we always went in here first to get it over with!”

ABOVE: A view of Claregate Street. Mary Fleming recalls:
“I was lucky enough to grow up on Claregate Street when it was full of busy businesses and inhabited by families.
“Mr Ryan ran a grocery and hardware shop at the bottom of Claregate Street. I was often sent down there for some messages - rashers, cooked ham, a few nails or whatever was needed at the time!
“Beside Ryan’s was Daly’s sweet shop, with either Pat or Peg behind the counter. Next was O’Neill’s Barbers.
“Mickey had a thriving business right up until his retirement with queues of men lining up for their haircuts.
“Jack and Mrs Twitchen lived beside the O’Neills. They were a gorgeous couple and grandparents of Michael Barber who still lives in that house.

“Across the lane was Fleming’s Drapery. This was started in the early 1900s as far as I know by my great grandmother Agnes Fleming, nee Heffernan. Her husband was Patrick Fleming.” 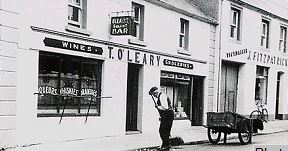 ABOVE: O'Leary's Pub. Mary Fleming recalls: “O’Leary’s pub is now The Goban Saor. Mr Tim O’Leary was the owner and his son Danny and daughter Maura also lived there when I was a child.
Joe Connell ran a butcher shop next door until his retirement. It was always busy and I think it had a yard attached where he butchered his own meat. Joe was preceded in that location by another butcher, Joe Fitzpatrick. On the site of what is now Macari’s, the Misses Fox had a wonderful drapery and haberdashery shop. Next up the street is now The Five Jockeys, but this was originally a car showrooms for Burke’s Garage. My memory of Mr Burke Senior is that he smoked big cigars. Whelan’s Drapers was on the corner of Claregate Street and The Square. I remember Mr Whelan being a tall, thin man, always beautifully dressed.”