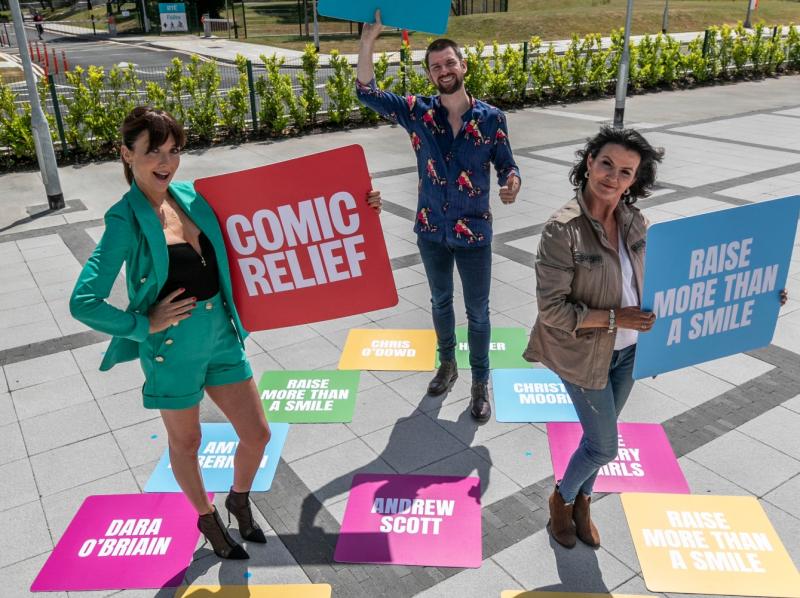 RTÉ in association with Comic Relief are bringing the cream of Irish comedy and entertainment together to raise a laugh, as well as much-needed funds for the Irish charity sector on Friday, June 26.

Having spear-headed Comic Relief’s previous presence in Ireland via the highly successful Paddy’s Night In Support Of Comic Relief shows at the 3Arena, Deirdre O’Kane has used her time in lockdown to connect with friends, colleagues and contacts in the entertainment industry to bring Comic Relief to television in partnership with RTÉ. The result is a who’s who of Irish comedy, music, film and entertainment, all of whom signed up to the show immediately at the asking.

The show will be broadcast live from RTÉ studios from 8pm with links to Irish talent across the country and further afield for an unmissable night’s entertainment worth staying in for.

John McHugh, Group Head of Entertainment, RTÉ said, “We want to raise a smile as well as much needed funds in one very special night. We want to thank the public for staying in so far, remind people that staying in still matters and while, celebrate the front-liners’ contribution and raise much-needed funds for a range of charities that are struggling to provide their services as their fundraising activities have been severely hampered.”

Richard Curtis, Founder, Comic Relief: “I’m delighted to see so much amazing Irish talent come together to raise funds at this hugely difficult time for so many incredibly important Irish charities. It’s fantastic to see RTÉ collaborating with the wonderful people at Community Foundation Ireland via Deirdre O’Kane and her many mates who’ve become firm friends of all of us at Comic Relief, here’s hoping the night is the massive success it deserves to be!”

RTÉ and Comic Relief’s charity partner for the event is The Community Foundation For Ireland who will distribute the funds raised. One of Ireland’s leading philanthropic organisations with extensive expertise in grant-making in Ireland, the Community Foundation for Ireland was established in 2000 and has a strong working relationship with over 4,000 non-profit organisations at a national, regional and local level throughout Ireland.

Tina Roche, Chief Executive, The Community Foundation for Ireland Said, “The Community Foundation for Ireland is delighted to be partnering with RTE and Comic Relief. The community and voluntary sector has seen a substantial drop in fundraising and requires much-needed funds to help people and our communities to support social issues such as mental health, homelessness and rising inequality and poverty. RTÉ Does Comic Relief is providing a platform for everyone to be a philanthropist and play our part in rebuilding our society, ensuring no one is left behind.”

Deirdre O’Kane, speaking on behalf of the Irish Comic Relief Steering Group, said, “After three years of fantastic live fundraising events, it's so exciting to be bringing this to TV for the first time in Ireland with RTÉ. I'm in awe of the response we've already received from comedians and performers and the incredible efforts our partners at RTÉ and the Community Foundation for Ireland have put in to make the show happen. It's going to be a memory-making night that'll raise serious funds to help people who need it most as a result of Covid-19."