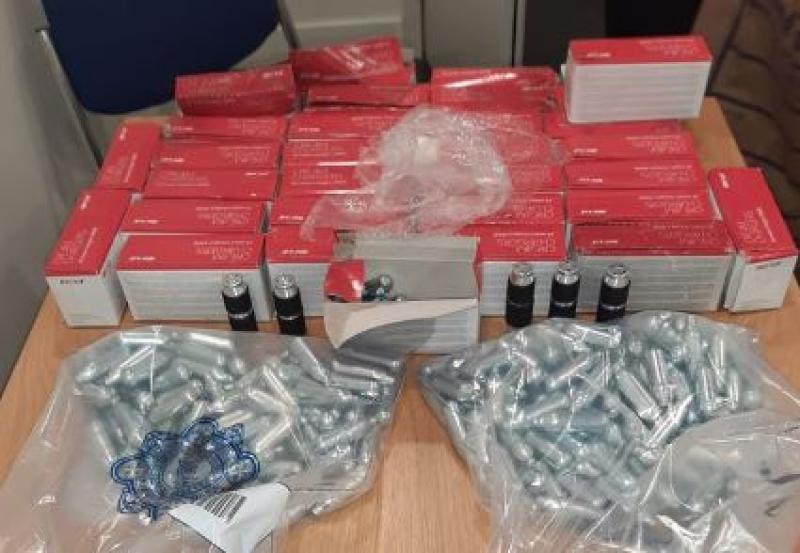 A display of the drugs seized

As part of Investigations into the sale and supply of controlled drugs in the Kilcock area, Gardaí searched a house in Kilcock in recent days.

During the course of the search a suspected quantity of ketamine with an estimated street value of up to €1,800, pending analysis, was found.

The selling of Nitrous Oxide canisters for human consumption is an offense Contrary to Section 3 of the Psychotic Substance Act 2010 and poses serious risks to health.

The Military Police in the Curragh Camp have recently warned of the 'potential for serious harm' of the so-called 'laughing gas' drug which has become common among some young people during the Covid-19 lockdown.

Numerous empty canisters which the drug is contained in are being seen in areas such as parks and by roadsides.

Youths with no school or exams to occupy themselves during the Covid-19 restrictions are believed to be experimenting with the drug.

The Naas-based South Western Regional Drug and Alcohol Task Force (SWRDATF) has urged the public to contact gardaí if they see use or evidence of use of this drug which can cause suffocation and be potentially fatal.

Spokesman Steven Joyce told the Leinster Leader: “There is no such thing as a safe substance or drug.

Like any drug, you cannot be sure of its quality if it’s being consumed and there could be all kinds of side effects on different people and implications on their health and well being.”

For more information on the risks and dangers associated with Nitrous Oxide, including valuable advice for parents, Kildare Gardai have referred people to this LINK.