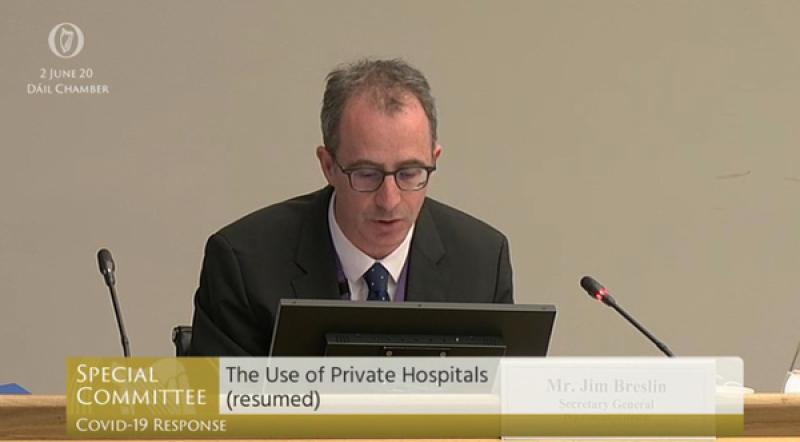 As Secretary General of the Department of Health and Children during the Covid-19 pandemic, Athy native Jim Breslin has been one of the highest ranking Government officials involved in the management of the unprecedented public health emergency.

Unlike the Department’s Chief Medical Officer Dr Tony Holohan, Mr Breslin has kept a low media profile but has had played a very important influence behind the cameras and microphones.

In his remit as Secretary General he has had overall responsibility for the Department’s management of the health emergency, as well as delivering policy advice and progress reports to Minister for Health Simon Harris.

He emerged into the media spotlight briefly at the Special Dáil Covid-19 Committee on May 19 to deliver a stark warning — that the Covid-19 crisis would probably be with us for years.

He told TDs and Senators: “The social and economic costs of Covid-19 have been huge and will be with us for some time. Yesterday saw the first easing of these measures under the Roadmap for Reopening Society and Business.”

He added: “The acute phase of this crisis will definitely be measured in months and most probably in years, rather than days.”

Mr Breslin’s sister Cllr Aoife Breslin said this week that the most senior Department of Health official is ‘a proud Athy man’.
After attending schools in Athy, Mr Breslin left for UCD in the late 1980s.
He graduated BA in Economics and Politics in UCD and a long and successful career in the public service began. He secured a job as Assistant Principal at the Department of Health and Children where he spent the next seven years of his career.
During this tenure, he was seconded to the Department of Finance as Administrative Officer for a 12 month stint.
In 1994 he had returned to education part-time and graduated with a Masters degree in Economics specialising in Policy Studies from Trinity College.
In 2000, he became Director of Planning & Commissioning at the Eastern Regional Eastern Regional Health Authority for the next four years.

He was involved in planning and commissioning a range of health and personnel social services provided within the greater Dublin area and was responsible for a capital budget of €200m per annum.
During this time, he studied for a MBA in Public Administration at the Harvard Kennedy School in Boston.

In 2011 he received a major promotion when he became the first Secretary General of the newly-established Department of Children & Youth Affairs.

He was appointed to his current position at the Department of Health and Children in 2014.