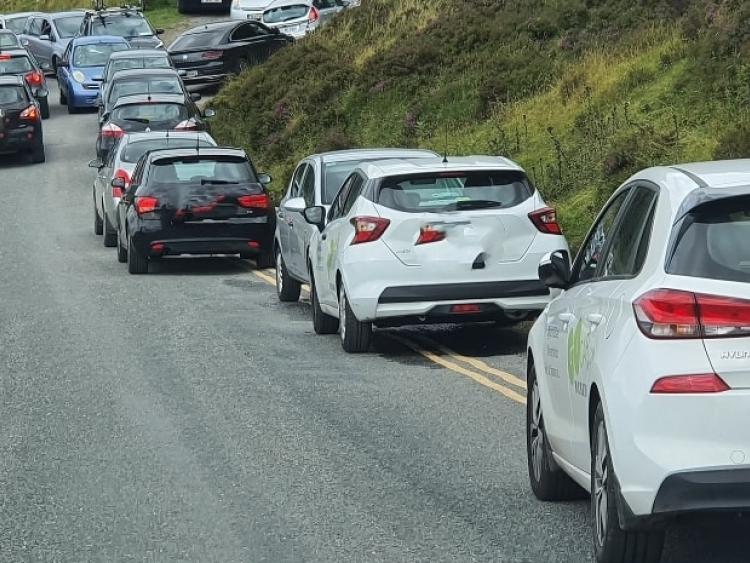 Vehicles parked at the scene today

Gardaí were forced to close off access to the Glendalough area for a period today due to traffic volumes - and as a result visitors to a nearby area parked illegally and restricted access to emergency vehicles.

All vehicles were issued with parking fines and gardaí warned that a tow truck would be on standby tomorrow to remove vehicles parked in a similar manner.

Good sunshine in many parts today brought out day trippers to the scenic Wicklow mountains who were glad of a respite from the rain of last week.

But Wicklow Gardai said: "Because of traffic volumes today, Gardaí had to restrict access to Glendalough this afternoon for two hours with traffic being denied access at the Wicklow Gap junction and Laragh.

"As a result people decided this type of parking was a good idea in Sally Gap and Luggala.

"All offending cars ticketed and a tow wagon now on standby for tomorrow.

"This kind of parking endangers everyone by restricting the emergency services."

Gardai attended the area and Fixed Charge Notices were attached to offending vehicles.

Gardaí said: "Please show respect for all other road users. Parking like this endangers other traffic and is illegal."

In another incident, gardaí issued fines to 45 vehicles parked illegally on a road to a scenic amenity of the Hellfire Club area in Dublin.

The  Roads Policing Unit in Terenure were patrolling Killakee Road, Rathfarnham when they came across the cars.

Gardaí said: "Cars were parked illegally and blocking a very busy road and were reducing traffic to one lane.

"They were preventing access for the fire brigade and ambulance services.

Gardaí and traffic wardens have the power to advise motorists of parking regulations and issue tickets for illegal parking and non-payment of parking fees.

They may also give evidence in court in relation to the non-payment of fines.