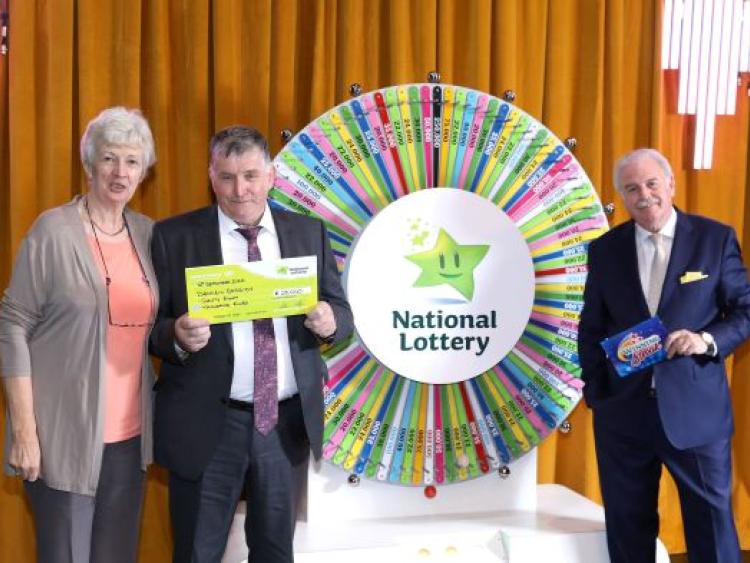 The 2019/20 season of the Winning Streak game show was concluded at RTÉ studios in Dublin on Wednesday as ten players took part in two separate game shows which paid out a total of €401,000 in cash prizes.

Among the big winners was Kildare man, Damien Cassidy from Prosperous who scooped a total of €28,000 in cash prizes.

Damien was originally due to appear on the Winning Streak TV Game show on Saturday 21st March but this was later postponed following government restrictions due to Covid-19.

Damien comes from Prosperous, Co. Kildare and in April he retired after 60 years being a farmer. However, lockdown has prevented him from celebrating it in any meaningful way. He is a patient man and knew his six month wait for Winning Streak would eventually come.

He was joined in the RTÉ studio by his wife Anne, to whom he has been married to 44 years. The two were childhood sweethearts as Anne’s family lived in the farm next to Damien’s when the two were young. Damien even took Anne to his debs and the two have been inseparable since.

The two have a massive family. This includes seven children who are Louise, Aine, Catriona, Patrick, Tim, Damien Jnr and John. Between them all they have given Damien and Anne a total of 19 grandchildren. Damien admits that the present he always receives from his family for any occasion (birthdays, anniversaries, Father’s Day etc) is Winning Streak scratch cards.

With his winnings he jokes that with the size of his family the winnings won’t last long but he hopes to bring Anne away for a holiday when it is safe to do so.

The Winning Streak National Lottery game show is co-presented by Marty Whelan and Sinead Kennedy and features some perennial favourite games including Play or Pay, Roll for Riches, WinFall and Electric Dream – where one player is guaranteed to win an electric car worth €25,000.

Attendance at the two Winning Streak game shows was in strict adherence to Government guidelines and attendees only included players and the requisite National Lottery and KPMG personnel. Each participating player had the opportunity to play the full suite of Winning Streak games with the same prizes on offer, whilst at all times ensuring all social distancing and health and safety guidelines were followed. The National Lottery has confirmed that this event will not be broadcast on RTÉ television.

Last August, the National Lottery and RTÉ announced that Winning Streak will not be returning this Autumn due to ongoing restrictions related to Covid-19.