Sallins festival curtailed by the virus - but a video is launched 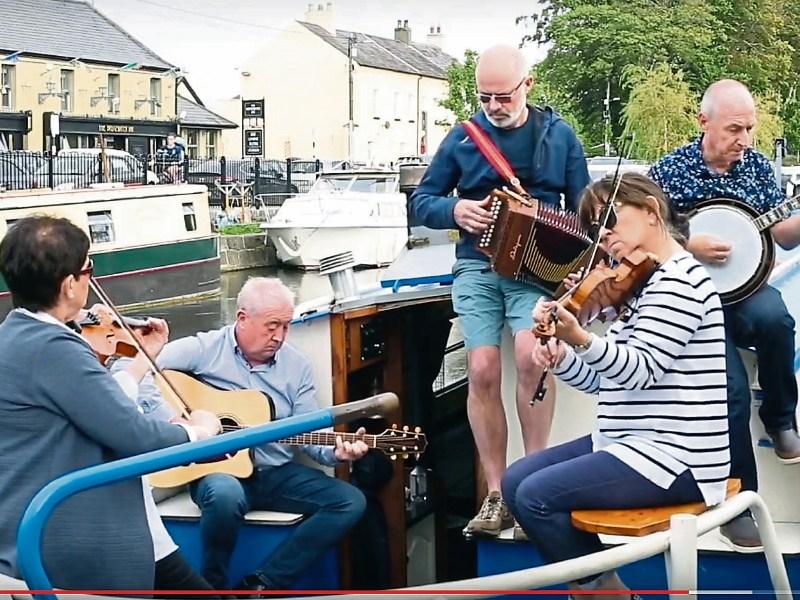 Musicians performing aboard a barge in Sallins

Covid-19 and the consequent prohibition on public gatherings has put paid to many events this year and  Féile na Sollán was no exception.

The annual traditional music and culture festival is hosted in Sallins and has evolved into one of the most popular  entertainment events of the year in the wider Naas area.

Ongoing restrictions effectively restricted the numbers who could attend - but a VIDEO of the event can it be seen on the Féile na Sollán Facebook page.

The video was filmed by Tony Gavin on location in Sallins and features some of the local musicians who perform regularly in our local pubs such as the Railway Inn, Sallins, Fletcher’s in Naas and the Kilteel Inn.

Among the participants are  Féilim Mac Donnacha/piano accordion and Pat Domican/guitar playing four jigs. Bryan O'Connell/small pipes playing a slow air and two jigs. The Sexton family play The Mist Covered Mountains and The Walls of Lisscarroll on concertina, accordion and fiddle. The  local group Sult plays a few more Irish Traditional tunes and Nuala Mac Lochlainn sings An Culann. This is all complemented by a bi-lingual commentary by Barra McGoff.

Naas native Ger Loughran at Bargetrip.ie provided one of his barges as a venue.

“Because of the situation with the ongoing Covid 19 restrictions we were not able to have our usual live acts, classes and other activities. So to make up for this, in a small way, the committee has produced a Féile video featuring some of the local musicians who perform regularly in our local pubs such as The Railway Inn, Sallins, Fletcher’s in Naas and The Kilteel Inn,” said Mr Gavin.