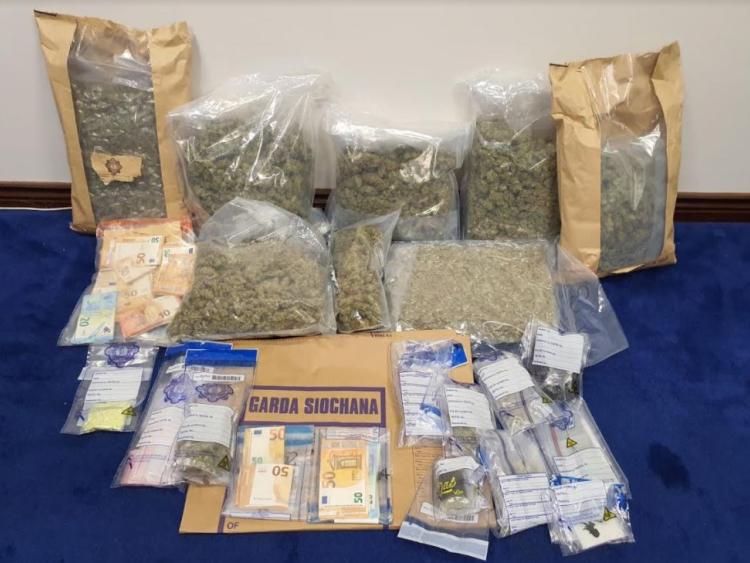 The drugs and cash seized

Gardaí carried out searches under the Misuse of Drugs Act in Blessington and Baltinglass over the weekend.

The searches were part of an overall operation which resulted in the seizure of various drugs valued at approximately €178,000 and over €9,500 in cash.

At approximately 2am on Saturday, Gardaí stopped a vehicle while on patrol on the Skerries Road in Rush, Co. Dublin.

A search of the vehicle and its occupant was conducted with assistance from the Balbriggan District Drugs Unit.

During the course of the search, suspected cannabis herb with an estimated street value of €46,000 was seized as well as cash to the value of €9,530. A male, aged in his 20s, was arrested at the scene and taken to Balbriggan Garda Station where he is currently detained under Section 2 of the Criminal Justice (Drug Trafficking) Act, 1996.

Following this seizure, a number of searches were conducted under warrant, at residences in Rush, Baltinglass and Blessington, Co. Wicklow on Saturday, 9th January 2021.

During the course of these searches six large vacuum packed packages of suspected cannabis with an estimated street value of €121,000 was seized. Smaller quantities of cannabis (€5,500), MDMA (€3,000) and cocaine (€2,500) were also seized. All drugs will now be sent for analysis.

A second male, aged in his 20s, was arrested and is currently detained in Ballymun Garda Station under Section 2 of the Criminal Justice (Drug Trafficking) Act, 1996.

Both men arrested in relation to these seizures have since been charged and the first man (20s) is due to appear before Swords District Court on Monday 11th January, 2021 at 10.30a.m.