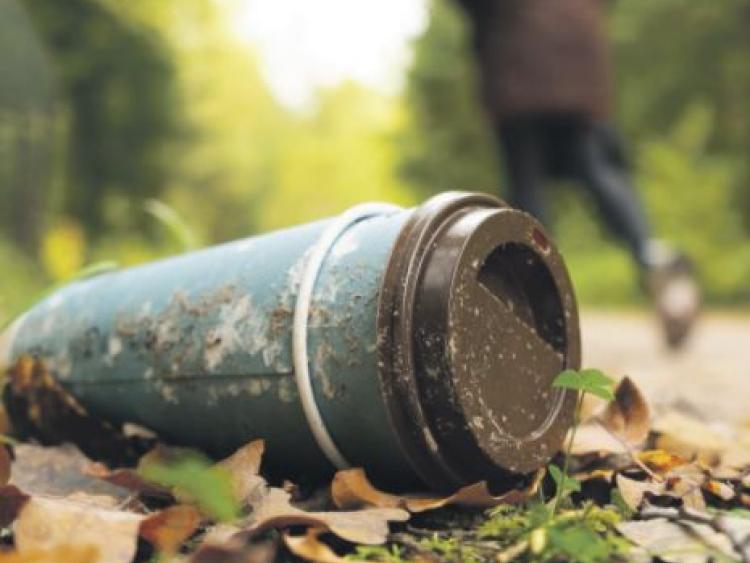 A litter survey of 2020 by business group Irish Business Against Litter (IBAL) shows Newbridge and Maynooth again Clean to European Norms and occupying 9th and 10th spots respectively in the ranking of 37 towns and cities.

Kilkenny retained top spot, ahead of Killarney and Ennis. 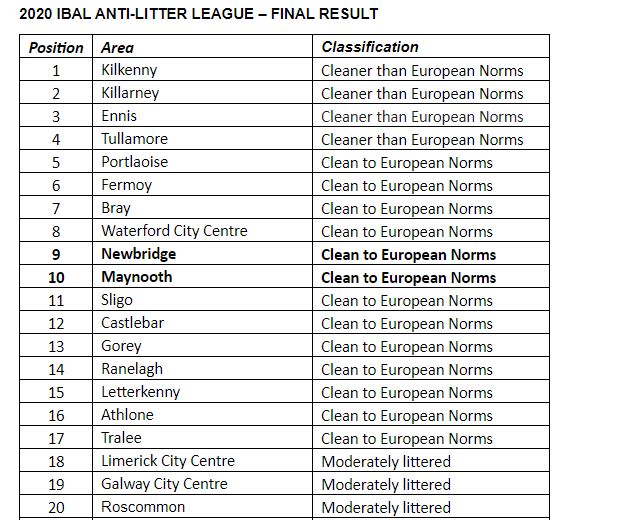 According to the report, litter levels continue to rise nationwide, with fewer than half of the towns surveyed deemed clean.

The An Taisce report for Newbridge stated: “Another excellent performance by Newbridge solidifies its place among our cleanest towns. Over half the sites surveyed got the top litter grade. The town centre shopping and adjoining laneway sites all scored very well in Newbridge e.g. Main Street, Edward Street, George’s Street and Limerick Lane.  Newbridge Train Station and R445 Curragh Approach Road just missed getting the top litter grade – not much effort is required to achieve this.  By far the most heavily littered site was Langton Road – this approach road had accumulations of ‘long-lie’ litter, much of it alcohol related, at the base of low lying shrubbery.”

The An Taisce report for Maynooth stated: “Some slippage after a great result last summer, but Maynooth has again done very well to claim a top ten spot in the rankings. Seven out of the ten sites surveyed got the top litter grade.  These included the approach roads, residential area of Moyglare Meadow, Main Street and historic site of ‘Maynooth Pound’ – these were not just good with regard to litter but well presented and maintained.  By far the most heavily littered site was the Recycle Facility at Aldi – huge volumes of bottles and other miscellaneous items had been discarded to the rear of the units.”

In all, litter levels rose in 24 of the 37 towns and cities inspected by An Taisce at the end of 2020, resulting in only 17 being judged to be clean – a fall of over 25% on last summer and in sharp contrast to just 3 years ago, when 80% were clean.

According to IBAL, the survey results are consistent with a trend in recent years. “The decline in cleanliness is less a case of the poorer areas getting worse, but of previously clean towns slipping to littered,” says IBAL spokesperson Conor Horgan. “Covid is clearly a factor here, but we should never accept litter as inevitable. It comes down to people disposing of their waste without regard for their surroundings or their fellow citizens and it is entirely unnecessary.”

One explanation for the rise in litter lies in the restrictions surrounding cleaning services during the pandemic.  “While council workers have not been on the streets as much as normal, the general public has been spending more time than ever out of doors,” says Mr Horgan.  There was a sharp rise in the amounts of litter on approach roads to towns, reflecting the fact that the benign winter has seen masses of people out walking. “Ironically, too many of them are showing a shameful disregard for the environment they are enjoying.”

Coffee cups were among the most prevalent litter types found, while there was another rise in glass bottles and cans, suggesting that outdoor drinking has not waned over the winter months.  The survey also showed that the second half of 2020 brought a further increase in PPE-related litter, primarily masks.  “8 months into the pandemic, we would have hoped people would have moved to reusable masks with a resulting fall in mask-related litter. In fact, we are seeing more and more of them ending up our streets,” says Mr Horgan.

The report highlighted a continued rise in the number of blackspots in towns and cities. IBAL was once again critical of the failure of local authorities to address sites that had been identified in previous surveys as heavily littered. 36 such sites were revisited in this latest survey, yet only 11% were found to have been cleaned up and more than a quarter had actually worsened.

Reluctance to pick up litter

According to IBAL, the reluctance among civic-minded people to pick up litter during the pandemic may carry long term consequences. “While people have certainly become more attuned to their natural surroundings and more conscious of how litter can spoil those surroundings, this is offset by an understandable unwillingness to pick up waste for fear of contamination. As the pandemic endures, and with it the sensitivity around touching items, people may simply get out of the habit of picking up other people’s litter.  We risk losing a civic behaviour which is vital in keeping our country clean.” concludes Mr Horgan.

Set up in 1996, Irish Business Against Litter is an alliance of companies sharing a belief that continued economic prosperity - notably in the areas of tourism, food and direct foreign investment - is contingent on a clean, litter-free environment.

As part of the IBAL Anti-Litter League, An Taisce monitors towns independently and in accordance with international grading standards.