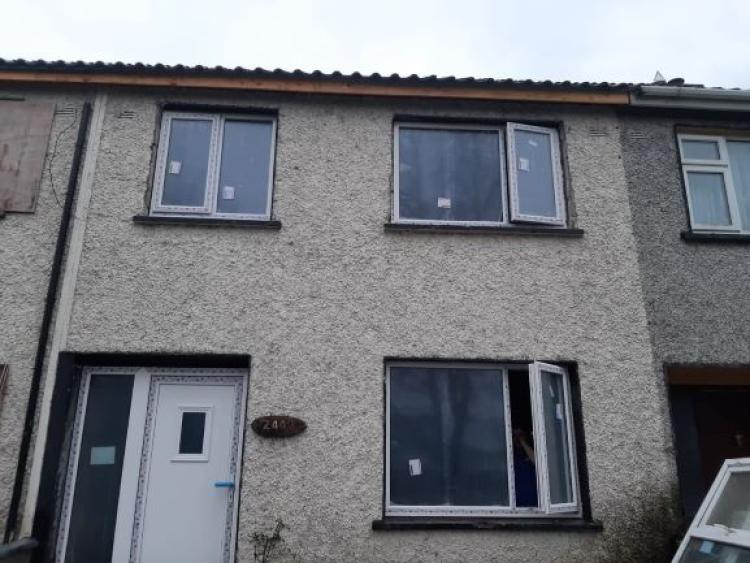 A popular Suncroft man, whose fire-ravaged house was being rebuilt for him and his wife, passed earlier this  month  — but work is continuing on the property as a tribute to his memory.

He is sadly missed by his loving wife Kathleen as well as sons Dominic and Tony, daughter Jackie, grandchildren, great grandchildren, extended family, neighbours and friends.

A massive community effort has almost completely rebuilt the Hall family home destroyed by fire nearly a year ago.
The blaze at the house in Churchview Estate meant that Dominic and Kathleen who lived there for nearly 50 years, were effectively homeless and had to be temporarily taken in by a relative.
Over the past 12 months, locals helped re-build the property with tradespeople and suppliers offering their services for free or at heavily discounted rates.

Over €20,000 has also been raised through donations from members of the public.
The committee behind the initiative said that work will continue so that Kathleen can move in during the weeks ahead.
A committee spokesperson said: “Dominic was an amazing family man and neighbour who was eternally grateful for everything the community has done for him over the past year.

Family man
“A proud and private family man who always supported any cause that knocked on his door.
“We will endeavour to keep our promise to Dominic and get his wife back to their house which was their home for nearly 50 years.
“May you rest in peace Mr Dominic Hall.”
Mr Hall had previously thanked the local community for working on the house.
He had said: “Thank you to everybody involved in the fantastic work being done to get us back home.
Both myself and Kathleen are absolutely overwhelmed with all of your kindness, hard work and the time you are all putting in.
“People we know and people we have never met have come to help us.
“We hope at some time to be able to meet and thank you all for for doing what we thought would never happen.
“From the bottom of our hearts we thank each and every one of you.”